The White House has proposed a new framework for the Build Back Better reconciliation package that includes $80 billion of IRS enforcement funding aimed at raising $400 billion over ten years. Unfortunately, IRS funding alone is unlikely to raise that much. The Congressional Budget Office (CBO) recently estimated a similar policy would raise $120 billion on net, while Penn Wharton Budget Model put the figure at $190 billion and even the President's own budget estimated less than $240 billion. To make up the difference, Congress should consider reviving a proposal to expand financial institution information reporting.

What’s In the Information Reporting Proposal?

According to recent estimates, the tax gap – the annual difference between taxes owed to the federal government and taxes that are actually paid or collected – totaled $550 billion in 2019.

The Administration's information reporting proposal is designed to shrink the tax gap by requiring banks to report total gross deposits and withdrawals each year. If enacted, it would improve voluntary tax compliance, allow the IRS to better target audits toward those underpaying taxes, and raise substantial revenue without increasing tax rates.

The IRS has long demonstrated that tax compliance rates are higher for income subject to third-party information reporting, as opposed to income that is entirely self-reported. An IRS analysis of returns from 2011 through 2013 found that 99 percent of income subject to both substantial information reporting and withholding – such as salaries and wages – was appropriately reported. At the same time, less than half of income subject to little or no reporting – such as income from partnerships, S-corporations, estates, trusts, farms, rents, and royalties – was reported. 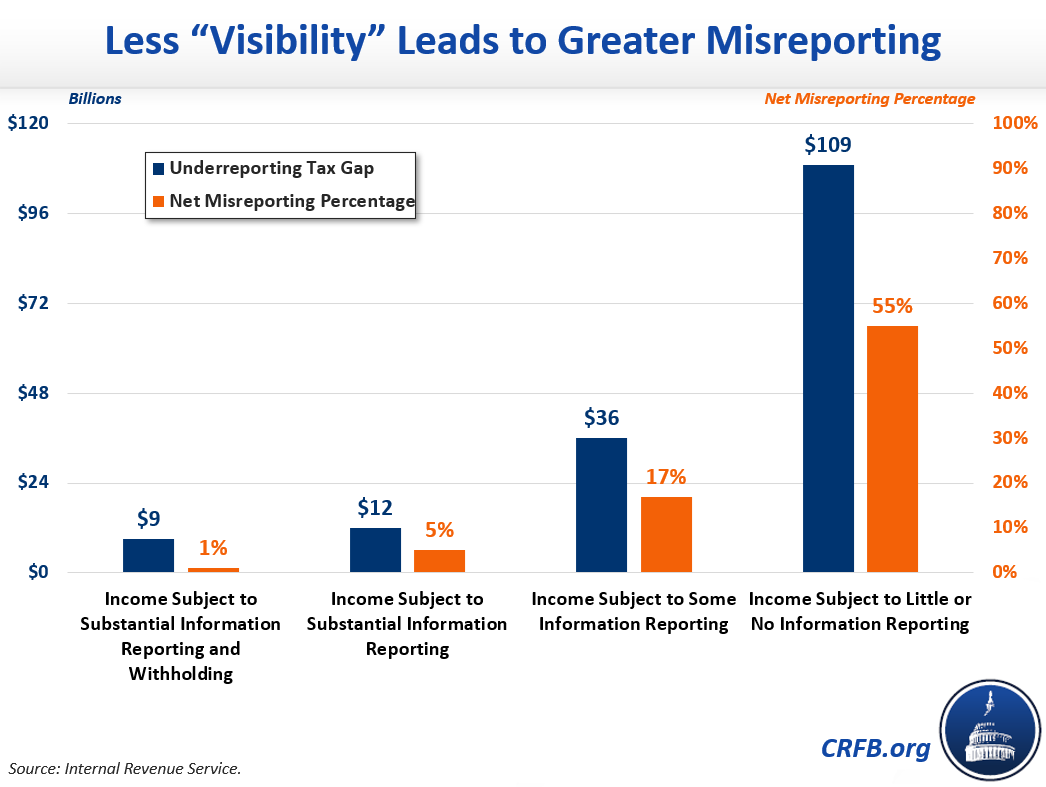 While the proposal under consideration would not increase direct income reporting, it would give the IRS the data it needs to better identify who might be underreporting their income.

Under current law, financial institutions submit total interest income that accrues to each bank account through a form known as the 1099-INT. This proposal would build on that existing report, requiring banks to also include total gross inflows and outflows of non-wage income from certain bank accounts.

Myths and Facts on Information Reporting

Just as important as what this proposed expansion of information reporting would do is what it would not do. First and foremost, this proposal does not involve a tax increase of any kind. Rather, it increases payment of taxes that people already owe under existing law, both by improving voluntary compliance and helping the IRS identify targets for audits. Presidents of both parties – from Ronald Reagan to Donald Trump – have long supported similar efforts to reduce the tax gap.

Second, the proposal would not give the government access to individual transactions. Banks would report only two numbers – total deposits (excluding wages and government benefits) and total withdrawals. The IRS can then use this information to better target audits, which will ultimately mean fewer unnecessary audits on individuals who appropriately report their income.

Finally, this reporting requirement would not apply to most bank accounts. It would be limited only to those with $10,000 or more of deposits and withdrawals in a year on top of wages and government benefits, which represents only a small percentage of bank accounts. The majority of Americans get most of their income from wages or government benefits (mainly Social Security), which are already subject to information reporting.

Expanding information reported to the IRS as proposed would raise revenue, allow the IRS to audit more efficiently, and improve tax compliance so more Americans pay the taxes they owe.

President Biden’s budget estimated a different version of the proposal – which had a lower gross flow threshold of $600 per year and did not exempt wage income – would raise $462 billion over a decade. Penn Wharton Budget Model estimated the proposal would raise roughly $300 billion. According to press reports, the Treasury Department has estimated the current  version of the proposal would raise $200 to $250 billion, though no official score has been released. This would be enough to bring the entire tax gap agenda – including IRS funding – to around the Administration’s $400 billion savings target. Expanding information reporting requirements for banks has also received bipartisan support. Recently, a group of former Treasury Secretaries from both Republican and Democrat administrations published an op-ed in the New York Times calling on Congress to take up President Biden’s tax gap proposals, including the expanded information reporting requirements. A bipartisan group of former IRS Commissioners also published a similar op-ed in the Washington Post.

As Democrats in Congress continue to refine the Build Back Better reconciliation legislation, they must not overlook revenue that is already owed to the federal government, but never collected. By simply expanding the information banks are already required to include on annual reports to the IRS, Congress can strengthen the integrity of the tax code, cut down on misreporting, and raise hundreds of billions of dollars in additional revenue, all without increasing taxes.