How Much Student Debt Has Already Been Cancelled?

Note: (8/30/2022): This analysis is now out of date. We released an updated version of this analysis, available here, which updates the estimated cost of the pause and distributional effects through December 2022, in light of the Biden Administration's latest extension of the pause.

Though some policymakers continue to propose cancelling some, most, or all student debt, a great deal of student debt has already effectively been cancelled. Overall, we estimate the equivalent of $5,500 per borrower will have been cancelled by the scheduled end of the student loan payment pause on May 1, at a cost of more than $100 billion. Extending the repayment pause further will cost an additional $50 billion per year, and policymakers should reject calls to do so.

Aside from some targeted cancellation by the current and previous administrations, nearly every borrower has benefited from interest cancellation during the current repayment moratorium while higher-than-expected inflation has eroded current balances. However, that benefit has been highly uneven and significantly more regressive than the already-regressive $10,000 across-the-board debt cancellation proposed by then-Presidential candidate Joe Biden during the 2020 campaign. 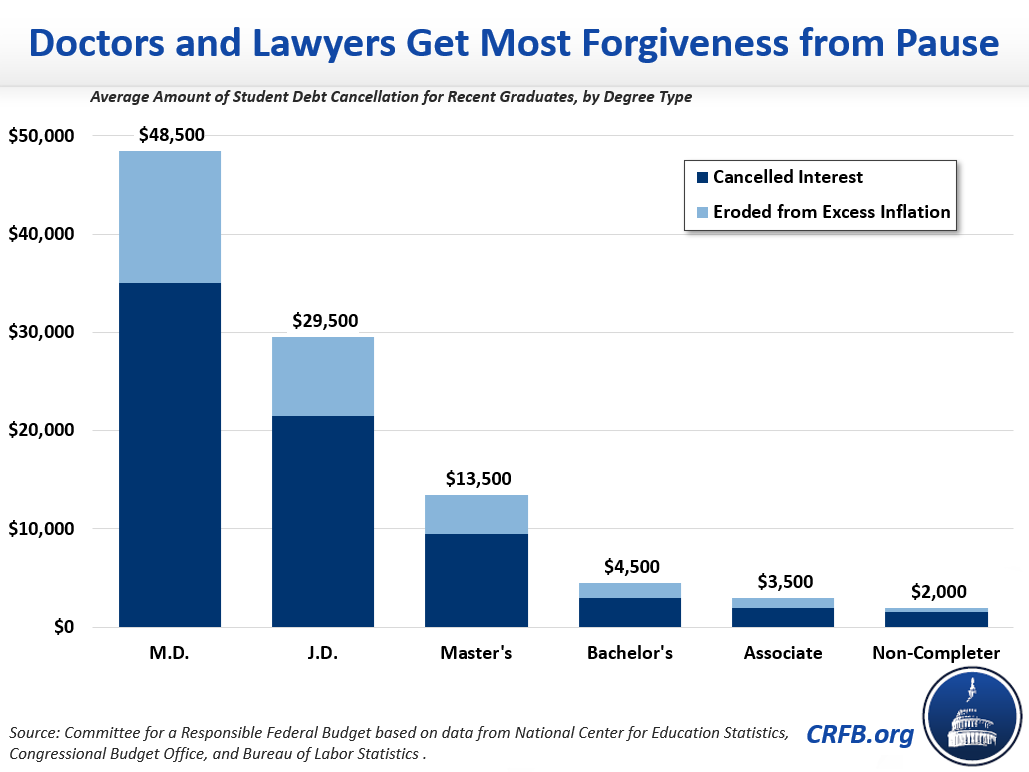 Our estimates incorporate the effects of the repayment pause and higher inflation. The payment pause, initiated early in the pandemic and extended through legislation and executive action across two administrations, forgives the interest that accrues for borrowers each month. Higher inflation, meanwhile, erodes the value of loan portfolios much more quickly than normal rates of inflation would. We estimate excess inflation will shrink the value of the loans by roughly 5 percent compared to what was expected at the beginning of the pause.

Importantly, our estimates reflect the portfolios of recent graduates who have not yet begun repayment. The average amount effectively forgiven for all borrowers in the categories above would be lower. For example, a typical doctor who graduated from medical school in 2016 and has been paying off their loans on a 25-year repayment plan would get roughly $42,000 of debt cancellation. A bachelor’s degree recipient who graduated in 2016 and has been on the standard 10-year repayment plan would get around $3,000 of forgiveness.

The primary reason that new medical school graduates have such high amounts of interest forgiven and debt eroded by inflation is that they incur much more debt than other students. A typical medical student leaves school with $265,000 of debt, compared to $31,000 for someone with a bachelor’s degree and $13,000 for someone who left school without completing a degree.2 That higher debt, of course, comes with higher earning potential. Eight of the ten highest-paid occupations in America are types of medical doctors – the other two are types of dentists. 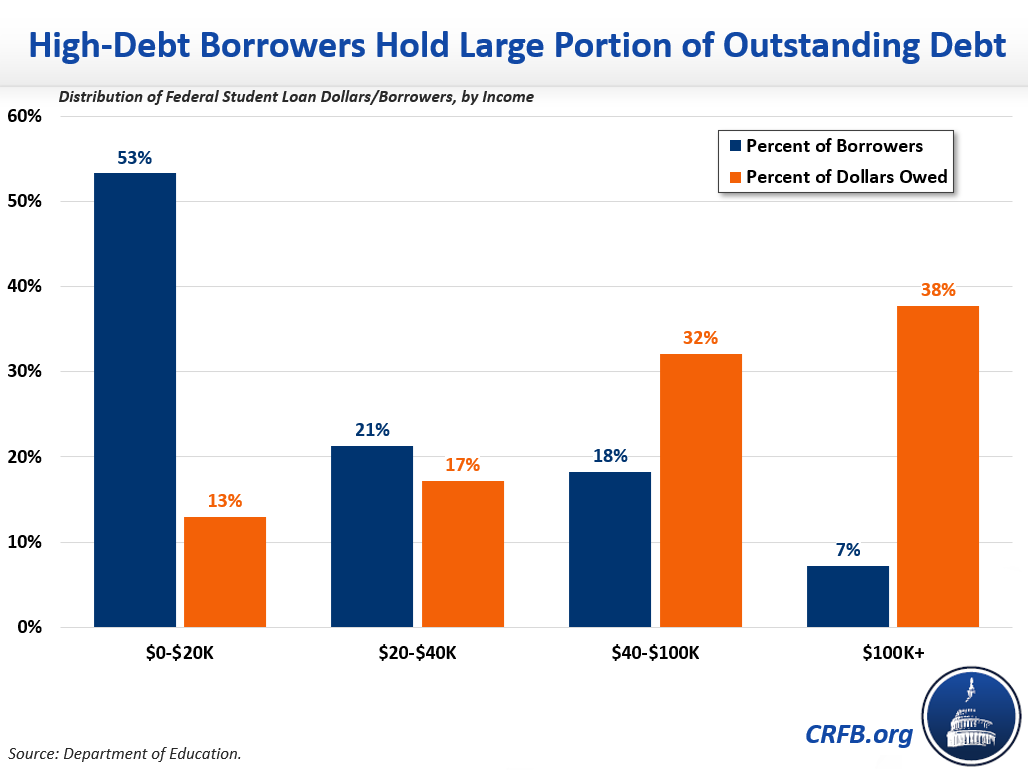 We have repeatedly noted that across-the-board debt cancellation – even if limited to $10,000 per person – is expensive and regressive on top of being poor economic and higher education policy.

Continuing the current payment pause would be even more regressive, benefiting high-debt, high-income borrowers significantly more than low-debt borrowers. It has already cost the federal government over $100 billion and would cost another $50 billion per year to continue. If the payment pause is continued through the summer, it will have cost half as much as forgiving $10,000 per borrower outright. At the same time, it will worsen inflation.

To the extent that some borrowers are still struggling to afford loan repayment, there are a multitude of income-based repayment options available to help. Borrowers are also eligible for payment pauses where interest accrues. But in a historically tight labor market where the unemployment rate for those with college degrees is below 3 percent, the payment pause has turned into a windfall for many of those doing the best in the economy. It’s time to turn the payment system back on.

1 Even though borrowers are not making payments, the 25 months covered by the payment pause do count towards loan forgiveness, and that likely increases the average forgiveness amount for borrowers enrolled in IDR programs. For borrowers who qualify for Public Service Loan Forgiveness, which forgives all loans after ten years of payments based on a borrower’s income, the payment pause effectively reduced the forgiveness period to eight years. This 20 percent decrease in the time to forgiveness can count for a lot. For example, if a borrower was beginning their ninth year of repayment when the pause started and thus is in their ninth year in their field, they could easily be earning $80,000 per year, which means they would have owed $6,000 per year. The payment pause thus would have cancelled an additional $12,000 for that borrower. The effects on IDR, which typically has a period of 20 years, are the same for a borrower who expects to have some amount forgiven at the end of the 20-year period.

3 The disparity in benefits from the repayment pause would likely be even greater than this suggests, since borrowers with larger levels of debt tend to pay off their debts over longer periods of time. Often a bachelor’s degree recipient is halfway done paying off their loans after five years, while someone with a medical degree will often have at least 20 more years payments. While that may seem like a long time, it’s worth noting that a doctor’s increase in their lifetime earnings will almost certainly far exceed the amount of debt borrowed.