Lawmakers and advocates have loudened their calls to cancel student loan debt before the current re-payment moratorium ends on May 1st. Given the current state of the economy, we estimate cancelling all $1.6 trillion of student debt would increase the inflation rate by between 10 and 50 basis points (0.1 to 0.5 percentage points) in the 12 months after repayment is scheduled to begin. This would represent a 4 to 20 percent increase relative to the median Federal Reserve inflation rate forecast.

Full debt cancellation would cost the federal government roughly $1.6 trillion, while improving household balance sheets by a similar amount. Consistent with our prior analysis, we estimate this would translate to an $80 billion reduction in repayments in the first year, which would in turn increase household consumption by $70 to $95 billion once the effect of higher wealth is considered.

Often, higher consumption leads to higher economic output.1 However, the economy is currently unable to meet existing demand in light of elevated disposable income, strong balance sheets, lingering supply constraints, and other factors. This disconnect helps to explain the why the inflation rate hit a 40-year high in the past year, and why further increasing demand could result in higher prices rather than higher output.

Assuming the economy remains hot and 90 percent of new consumption leads to price increases as opposed to increases in output, we estimate cancellation of all outstanding student debt would boost personal consumption expenditure (PCE) inflation by 37 to 50 basis points (0.37 to 0.5 percentage points) in the year after debt repayments are scheduled to resume. Even if only one-third of new consumption feeds into prices and the Fed responds with further tightening, we estimate student debt cancellation would increase inflation by 10 to 14 basis points.2

Importantly, none of these estimates incorporate the possible effect that broad student debt cancellation could have on tuition prices. Prospective students may expect future rounds of debt cancellation, which could increase their willingness to take on more debt, thus decreasing their sensitivity to the prices that schools charge and ultimately making it easier for schools to increase prices even faster than they already do. 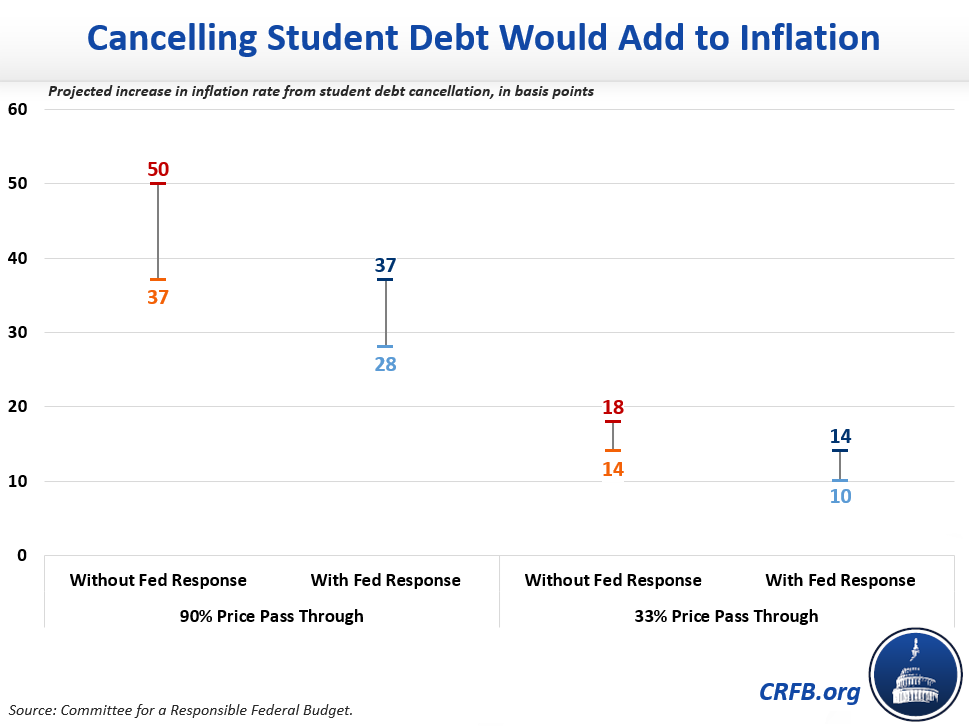 Moreover, even a modest increase in inflationary pressures could feed into current inflation dynamics, increasing the risk of a wage-price spiral and making it harder for the Federal Reserve to re-anchor inflation expectations around its current target. Much of this increase would also occur if the Biden administration continued the student loan payment moratorium for another year, since it would result in the same increase in cash flow to individuals.

Besides adding $1.6 trillion to the national debt and disproportionately benefiting higher-income individuals, we find student debt cancellation would cause prices to increase faster than they already are, exacerbating inflationary pressures.

1 In November of 2020, we estimated full student debt cancellation would boost output by roughly 0.3 percent per year in years that output remained significantly below potential. Considering current economic dynamics, we now estimate full student debt cancellation will boost output by 0.0 to 0.3 percent over an equivalent time period. In June of 2021, we estimated cancelling $10,000 per person in student debt would increase output by 0.04 over three years, and cancelling $50,000 per person of student debt would increase output by 0.13 percent. These estimates assumed that higher inflation (and interest rates) would limit the potential economic gains from such debt cancellation but would not be fully limiting until the beginning of 2024. Given current economic dynamics, we now expect smaller output gains, particularly in 2022, but have not updated our analysis.

2 While we have not yet estimated the inflation impact of partial debt cancellation, we expect it would be roughly proportional to the amount forgiven.

3 As a comparison, $1.6 trillion of additional “recovery rebates” would increase inflation by 115 to 510 basis points using the same methodology.