Though most COVID relief has already been spent, several policies continue to provide ongoing financial support and could be renewed again by Congress or the President. In particular, the federal government continues to offer increased payments to Medicare providers, forbearance for student loan borrowers, and an enhanced Medicaid matching rate (a form of aid to states). Though some spending to specifically address the pandemic may still be warranted, policymakers should wind down these COVID relief policies rather than continuing to extend them.

In this piece, we show that continuing these three policies would be:

Importantly, each of these policies is different and requires a different approach to address.

Higher Medicare provider payments, which come mainly from a temporary suspension of the 2 percent Medicare sequester, are scheduled to mostly phase out over the next four months. Under current law, half of the sequester will come back on April 1 and the full sequester will return on July 1. Lawmakers should allow the suspension to phase out as scheduled rather than extend it as they have four times since the pandemic began.

The student loan payment pause, which allows most borrowers to avoid paying back their student debt or accruing interest, is scheduled to end on May 1. However, the President extended it unilaterally just before it was previously supposed to end on February 1 and is apparently considering further extensions. Repayments should resume on May 1 as scheduled, through legislation if necessary, and the Department of Education should begin the process now to prepare borrowers.

The enhanced Medicaid match – which pays states an extra 6.2 percentage points of their Medicaid costs (a roughly 10 percent increase in the federal share) – is the most complicated. The enhanced match continues so long as the President continues to declare a “public health emergency” (PHE). The current declaration is scheduled to expire on April 16 but can be extended up to 90 days at a time, and likely will be at least one more time.

What makes this enhanced match complicated is that the state aid is coupled with a requirement that states continue Medicaid coverage to anyone who was enrolled in Medicaid at the start of the pandemic or became eligible during the pandemic. Congress and the President should work together to develop and enforce a plan to unwind the enhanced Medicaid match while assisting in the smooth transition back to pre-pandemic Medicaid eligibility rules.

In all three cases, given current economic and fiscal conditions, it’s time to put an end to ongoing COVID relief.

Though deficits are coming down from their record levels set during the pandemic, the federal government is still slated to borrow nearly $13 trillion through the end of 2031; there is no need to further add to that debt load.

If continued for the whole year, we estimate higher Medicare provider payments would cost $20 billion in calendar year 2022, student loan forbearance would cost $50 billion  and the enhanced Medicaid match and associated coverage requirement would cost $90 billion. These represent total costs, not the additional cost of extension.1

This $160 billion cost in 2022 would grow over time and, in the hypothetical where all the policies are permanent, grow to roughly $2 trillion over a ten-year period. That’s about 0.7 percent of GDP and in line with the cost of the 2017 tax cuts and the American Rescue Plan (though most ARP spending was over two years rather than ten).

Early in the pandemic, health care providers had to cancel many elective procedures, households were suffering from job and income losses, and state governments were in financially tenuous positions. Meanwhile, the macro-economy was in desperate need of support, with output down by roughly 10 percent in the first full quarter of the pandemic. Increased Medicare provider payments helped support doctors and hospitals, student loan forbearance assisted struggling households, the higher Medicaid match helped state governments, and all three supported the economic recovery. However, this relief is no longer justified. 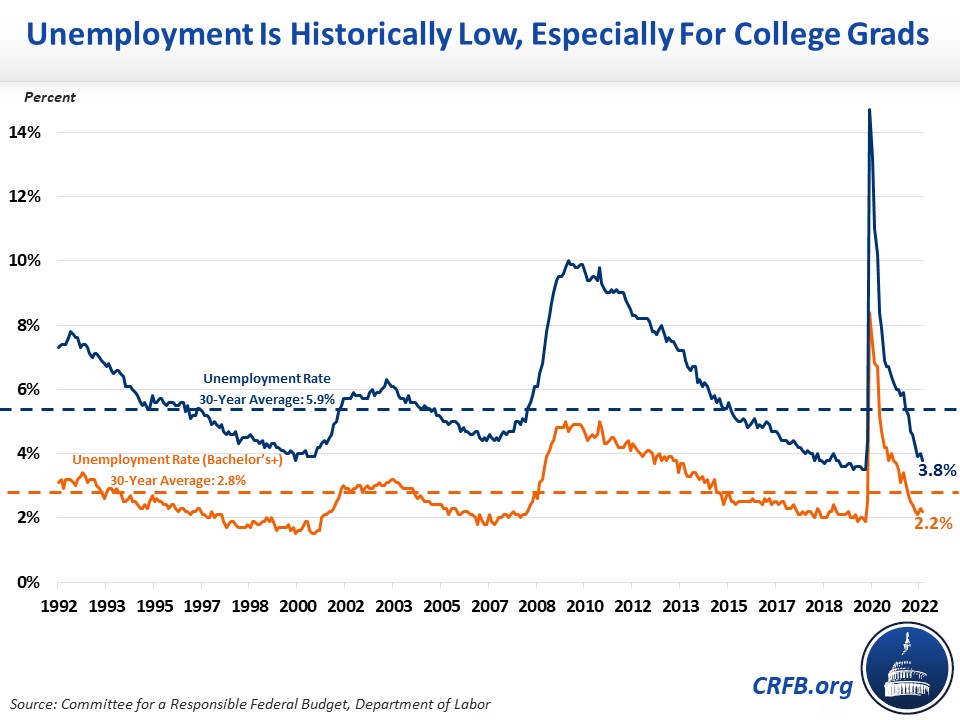 Hospitals have seen elective procedures and in-person visits largely normalized at this stage of the pandemic, while hospital revenue has returned to its pre-COVID trend. Finally, state governments are literally flush with cash. Total state and local receipts in 2021 were 26 percent above 2019 levels and even excluding federal aid state and local revenue was 14 percent above pre-pandemic levels by the end of last year. The majority of states are currently running large surpluses and enacting new tax cuts.

Not only do these COVID relief programs add to the deficit and offer support that is largely superfluous, but they are also worsening inflation, which is already at a 40-year high.

Under normal economic conditions, these COVID relief policies would tend to increase near-term economic output. When total demand is well in excess of supply, however, much of the gains will instead flow through to inflation. These three COVID relief policies may be particularly inflationary relative to their cost, since increased provider payments feed directly into prices, funding to states tends to have a high demand multiplier, and student loan borrowers may spend their deferred principal payment as well as their forgiven interest.

Assuming 90 percent of new consumption leads to price increases and the Federal Reserve does not adjust monetary plans in response, we estimate these policies would be responsible for 49 to 68 basis points (0.49 to 0.68 percentage points) of personal consumption expenditure inflation if kept in effect for the full year. On the low end, if only one-third of new consumption feeds into prices and the Fed responds with further tightening, we estimate these policies would increase inflation by 14 to 19 basis points. 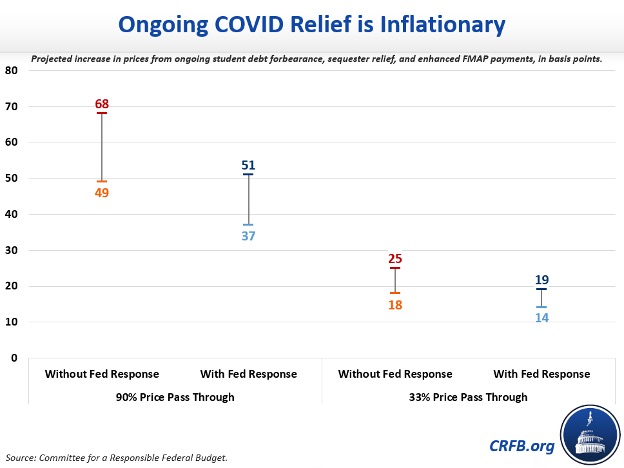 Given the current state of the economy and the budget, there is no longer a case for continuing to extend various COVID relief measures. Doing so would be costly, is unjustified in current circumstances, and would worsen inflation.

Importantly, each policy will need to be unwound in a different way. The executive and legislative branches should commit to let increased Medicare provider payments phase down as scheduled and to restart student loan payments on May 1, and they should reinforce each other’s commitments with legislation and veto threats. When it comes to Medicaid, policymakers should set an end date for the public health emergency (and possibly disconnect the PHE from the Medicaid match) and support states as they begin their redetermination process.

Neither Congress nor the President should implement continued extensions of these policies. It’s time to unwind ongoing COVID relief.

1 Because the enhanced Medicaid match and student debt repayment pause can be continued by executive action, the "baseline" cost of these policies is unclear. The figures discussed in this analysis represent the total gross cost of all three policies if they are in full effect over the relevant period, without regard to how much of that cost is the result of past or future policy choices