The President and Congressional leaders announced a plan to raise the caps on discretionary spending by $322 billion for Fiscal Years (FY) 2020 and 2021, which, by our estimate, would add roughly $1.7 trillion to projected debt levels over the next decade. Below, we address some common claims that have been made about the deal, known as the Bipartisan Budget Act of 2019 (BBA19), and put those claims in context.

Advocates of BBA19 argue that it does not need to be offset since it merely maintains current spending levels. This claim fails to recognize how large a spending increase it is relative to current law and the degree to which it codifies huge spending growth between 2017 and 2018.

It is true that BBA19 does not massively increase discretionary budget authority relative to 2019 levels – though the 3.6 percent increase between 2019 and 2020 is nearly double the inflation rate. Yet that 3.6 percent increase is built on top of a massive 16 percent increase between 2017 and 2019. Current law calls for that massive increase to be reversed; the current 2020 caps are about 5 percent above 2017 nominal levels but slightly below when adjusted for inflation. The BBA19 increase would make it permanent, leading to 21 percent spending growth between 2017 and 2021 and adding $1.7 trillion to projected discretionary spending levels over the next decade.

Because the BBA19 increases spending caps by about $320 billion and includes $55 billion of offsets, some have claimed it would only cost $270 billion over the next decade. However, this figure excludes both the interest cost associated with the bill and the indirect impact of higher discretionary levels on future spending.

Because of the bill's front-loaded nature, interest on the $320 billion alone will cost almost $100 billion through 2029, leading to a net cost of $360 billion. More significantly, spending levels in 2021 dictate baseline discretionary spending in future years. Because negotiators chose not to extend spending caps beyond 2021, the Congressional Budget Office's (CBO) baseline will assume spending in 2022 and beyond will grow with inflation – and all future budgets will be measured as a cut or increase relative to that assumption. Thus, total discretionary spending would be $1.2 trillion higher between 2022 and 2029, and total deficits as a result of the deal will be $1.7 trillion higher.

Rather than address the cost of the plan, some have argued that we don't need to worry since discretionary spending isn't a major fiscal problem. They are right in the sense that our long-term debt growth is driven by the rising costs of Social Security and health care and the failure of revenue to keep up; indeed, three-quarters of the spending growth over the next decade is due to spending on Medicare, Social Security, and Net Interest, and those programs have an even more significant impact over the long term.

Yet it is fallacious reasoning to suggest that because discretionary spending is not rapidly growing we can spend as much as we want on it without refrain. $320 billion over the next two years is the equivalent of 0.7 percent of Gross Domestic Product (GDP). That's enough to cover more than half the projected growth of Medicare over the next decade. It is also nearly as expensive as the 2017 tax cuts, which also don't address mandatory spending but are nonetheless fiscally significant.

If the spending bill passes and the tax cuts are made permanent, debt will reach 101 percent of GDP by 2029. Had neither the Bipartisan Budget Act of 2018 (BBA18) nor the Tax Cuts and Jobs Act of 2017 (TCJA) been enacted in the first place, debt would total only 85 percent of GDP. To say these measures have no fiscal impact because they don't affect the drivers of debt is simply false. 4. "Even with the deal, discretionary spending would be low by historical standards"

Some advocates of the BBA19 argue the bill is necessary to maintain an acceptable level of discretionary funding and would simply restore discretionary spending to 2010 levels, adjusted for inflation.

While necessity is in the eye of the beholder, it is misleading to suggest a return to 2010 levels is austere or even normal. Indeed, 2010 discretionary levels were the highest in history – so high that both parties supported reductions after 2010. The BBA19 would bring discretionary spending, in inflation-adjusted terms, to the second highest in history – nearly as large as 2010 and well above any other year before 2018. To be sure, it may not always make sense to measure discretionary spending in inflation-adjusted dollars. In some cases, as we've explained, it is more helpful to adjust for population growth or even GDP growth. Yet even as a share of the economy, discretionary spending under the BBA19 will be in line with historic averages. These levels may indeed be desirable, but if so policymakers should offset the costs.

5. "There are no good ways to pay for the bill"

Actually, there are many, many ways Congress could have paid for this bill.

Our paper A Plan to Raise the Caps Without Breaking the Bank proposed an illustrative plan that is offset with $75 billion each in spending cuts, tax revenue, and offsetting receipts. 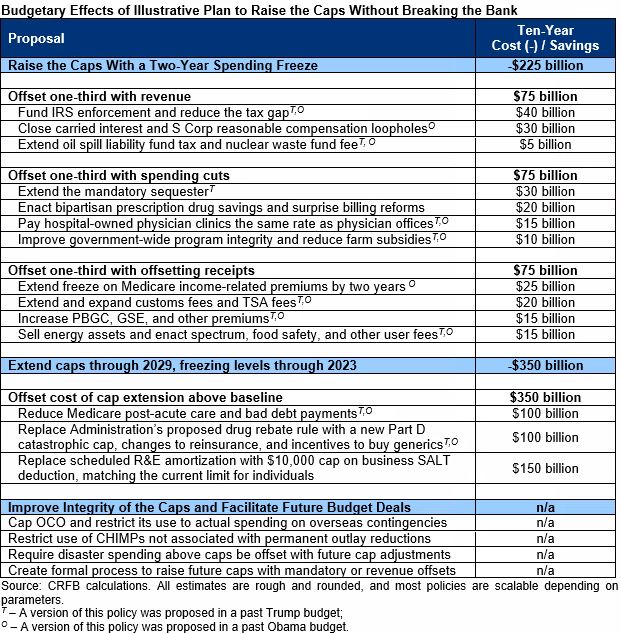 Our paper also included an appendix containing a menu of over 60 other offsets policymakers could use to pay for any discretionary spending caps increase, with some from budget proposals put forth by both President Trump and former President Obama and other policies with bipartisan support. With so many pay-fors at its disposal, Congress could (and should) still make the choice to fully offset the cost of the latest budget deal.