Provider Tax Limits Should Be On The Table for Medicaid Reform

Recently, the Center on Budget and Policy Priorities (CBPP) criticized the House Energy & Commerce (E&C) Committee for proposing to limit abuse of provider taxes, a mechanism states can use to artificially inflate their Medicaid payments from the federal government. They argued that provider taxes are not actually abused, and that limiting them would result in “damaging Medicaid cuts and undermine health reform’s Medicaid expansion.”

Though CBPP's commentary, authored by Edwin Park, makes some valid points, we believe they in some ways are off the mark. We explain below that:

1. Provider taxes are in fact abused to generate “free money” from the federal government.

Rather than the state receiving all the additional federal funds, sometimes they share them with Medicaid providers. For example, the Government Accountability Office (GAO) found that in 2012, Illinois increased payments to nursing facilities by $220 million, funded with $110 million of federal matching funds and $115 million of provider taxes from nursing facilities. In this case, Illinois was able to increase provider payments by a net of $105 million while reducing its general fund contribution by $5 million. 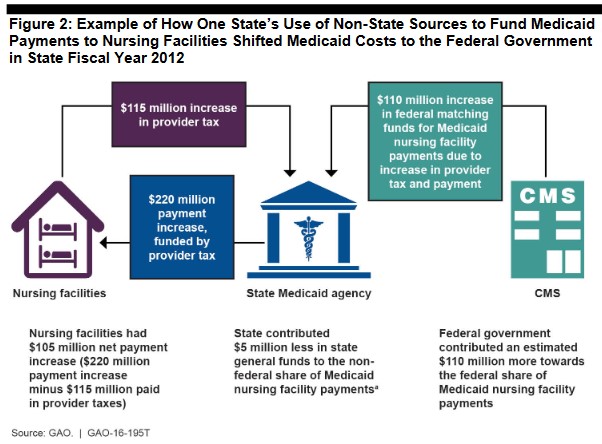 Schemes like this led GAO to conclude in 2014 that provider tax “arrangements can effectively shift costs from states to the federal government.” Others have gone further, suggesting that it doesn't just shift costs, but increases total costs as well.

CBPP argues that restrictions placed on provider taxes in 1991 and 2006 (along with tough regulations) have effectively ended its abuse by making such practices illegal. We believe this argument does not stand up to scrutiny.

Numerous non-partisan and parties observers agree that the provider tax continues to be abused. In 2007, the Congressional Budget Office (CBO) suggested that states “use such [provider] taxes to effectively inflate their federal matching rate.” In 2010, the bipartisan Simpson-Bowles Commission called the practice a “tax gimmick”, and less than a year after that, the Obama Administration proposed limits to the provider tax as part of a plan to improve program integrity (the Administration again proposed this limit in 2012 in the President's budget but has not since).

That same year, Vice President Joe Biden called the provider tax a scam, and a year later the Washington Post called limiting it "A Much Needed Medicaid Reform" to stop states from being able "to manipulate the statutory funding mechanism, adding to the federal deficit."

A recent deep dive into the issue by Mercatus Center’s Brian Blase demonstrates clearly that the Medicaid provider taxes represent one of several “techniques that states use that create the appearance of a Medicaid payment but are actually accounting gimmicks.”

2. Limiting the provider tax will help force states to make trade-offs as intended under the Medicaid program.

In addition to arguing the tax is not abused, CBPP argues that limiting the tax would weaken Medicaid, which in turn would hurt low-income individuals by forcing states to cut benefits. While it would be naïve to think that significant Medicaid cuts would be made up for entirely with improved efficiency in every state, it is important to recognize that putting limits on provider taxes simply forces states to better wrestle with the trade-offs that are intended under the Medicaid program.

Medicaid is a joint federal-state health care program, where federal government provides the majority of the funds and the states have the majority of control in administration. Federal Medicaid funds are intended to be based on a formula, which takes into account the needs of each state – not the ability of each state to engage in creative financing – and then states decide how much and where to spend on Medicaid (while abiding by federal rules).

By offering the states free money on top of the intended match, provider taxes essentially stop states from having to make these choices. According to a 2002 paper from Teresa A. Coughlin and Stephen Zuckerman of the Urban Institute, this “is contrary to a basic tenet of Medicaid: That is, it is a program in which the federal government and states or localities share the financial burden.” It also, unsurprisingly, leads to higher overall spending and costs.

With further restrictions on the abuse of provider taxes, states would have to better make choices about how much revenue to raise, how much and where to cut non-Medicaid spending, where to find ways to improve the efficiency of the Medicaid program, and where to reduce the generosity of benefits.

These are tough choices, but the same choices that any other individual, business, or government would have to make. Without budget constraints, spending could grow uncontrollably.

And if the federal government does not believe states should wrestle with these choices, it should modify the matching formula or regulations to prevent them from having to doing so, not help states indirectly by letting them artificially increase their reported Medicaid cost. The same principle applies to incentives for states to expand Medicaid under the Affordable Care Act, which should be driven by the federal matching rate rather than the ability of states to inflate that rate to above its intended levels.

3. The E&C-proposal to limit provider taxes is extremely modest – probably too much so.

The proposal from the E&C committee would not prevent states from using provider taxes or dramatically cut federal payments to states. Rather, it would lower the tax threshold from 6% of provider revenue to 5.5%, the threshold in place from 2008 through 2011.

Only about half of states currently have a provider taxes above 5.5% on any of the six common provider types, less than one-quarter have two or more of them, and only 4 states impose a tax above 5.5% on 3 or more provider types. This means that most states either would not be effected by a 5.5% cap at all, or could easily make up for revenue losses by increasing provider taxes elsewhere. 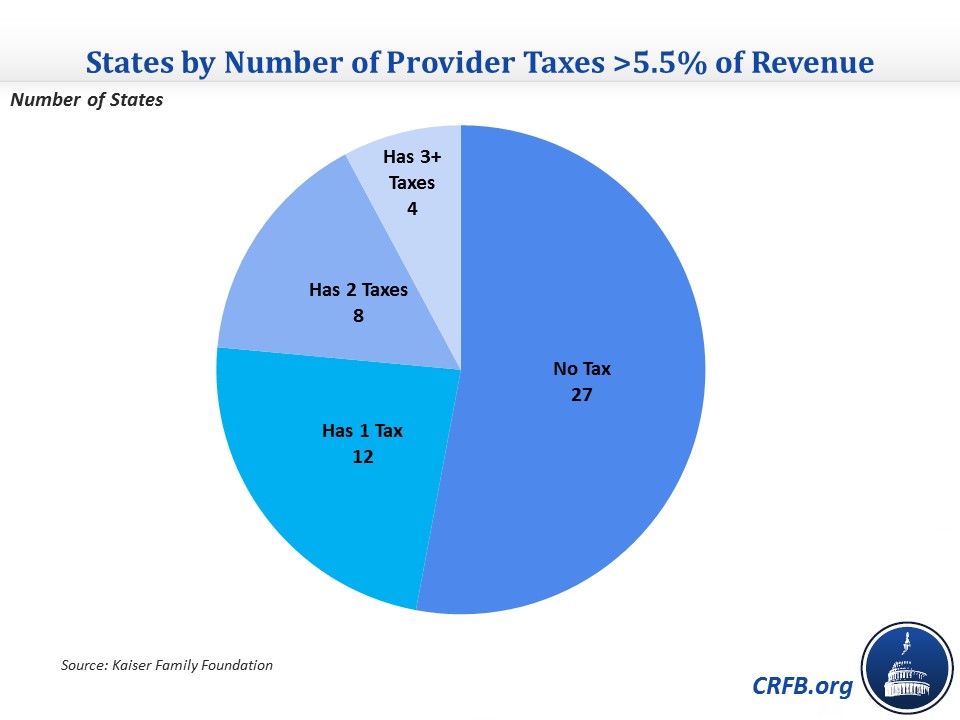 And to the extent states did experience revenue losses, they would be small. Indeed, the Congressional Budget Office estimates the E&C proposal would save the federal government under $0.5 billion per year, only 0.1% of projected Medicaid costs.

Given the egregious use of the provider tax and the ease with which states could simply shift it to other providers, the E&C policy to reduce the threshold from 6% to 5.5% is if anything far too modest. As recently as 2012, the Obama Administration called for gradually reducing the threshold down to 3.5%. The Simpson-Bowles Commission, on a bipartisan basis, called for eventually (but gradually) eliminating the threshold altogether so that no provider tax could be imposed while holding providers harmless. Compared to these proposals, the E&C recommendations are quite weak.

4. As one of the largest and fastest growing government programs, Medicaid should not be exempt from all scrutiny.

Medicaid is the fourth-largest program in the federal government, and outside of interest is projected to be the fifth-fastest growing program as well. By 2026, the program is projected to cost almost $650 billion per year – which is more than we will spend on food stamps (SNAP), SSI, unemployment insurance, veterans programs, military retirement, agriculture subsidies, and health exchange subsidies combined. 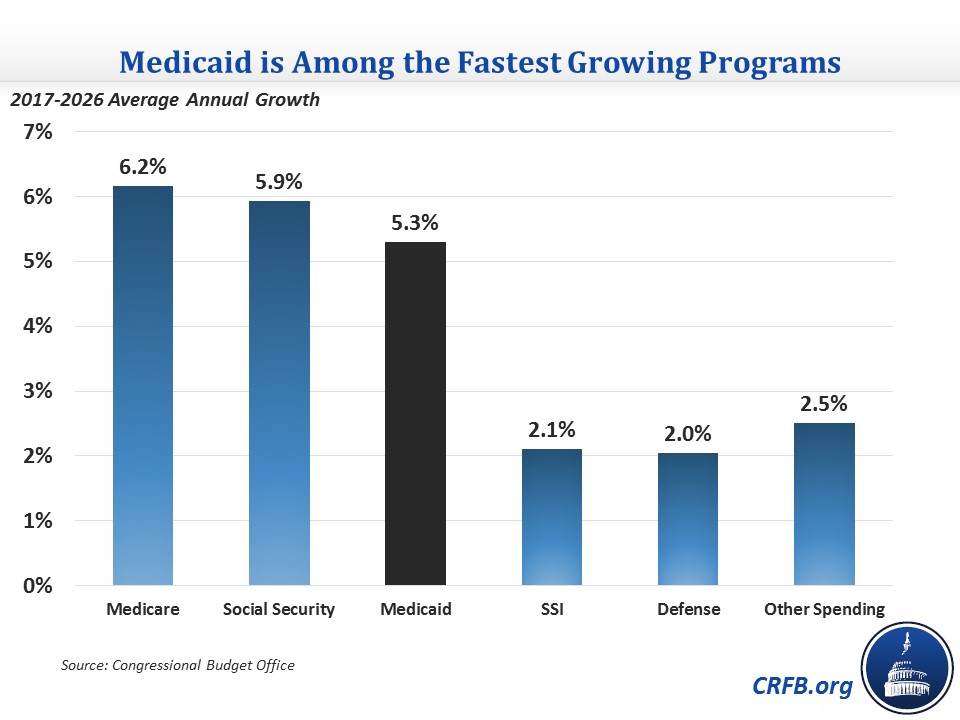 While lawmakers should certainly tread carefully when making changes to programs that serve low-income populations, the Medicaid program is simply too large to ignore entirely. This is particularly true given that Medicaid’s cost growth is driven by the same forces as other rapidly-growing parts of the budget: rising health costs and an aging population.

Given the vulnerability of the Medicaid population, it would be wise to focus reforms on areas where care can be delivered more efficiently or program integrity can be improved.

President Obama has proposed several changes on this front, focused on limiting medical loss ratios for Medicaid managed care providers (saving $23 billion over ten years), reducing Medicaid drug costs ($11 billion), and increasing anti-fraud efforts ($2 billion). E&C has put forward other ideas such as limiting Medicaid’s enhanced matching rate for prisoners and better accounting for lottery winnings in income determination. Other proposals ranging from limiting reimbursements for administrative costs to allowing nominal increases in cost-sharing for people above the poverty line to improving care coordination among those dually eligible for Medicare and Medicaid could also be considered. It's worth noting that Medicaid savings other than those affecting matching rates would also provide savings for states, helping to compensate for the loss of provider tax revenue.

Larger reforms, of course, should also be on the table – though they should be thought through very carefully before implemented.

But preventing states from artificially inflating their alleged costs in order to syphon money from the federal government should be near the top of the list of any plan to control Medicaid costs. “If we can’t do this,” Vice President Biden remarked in 2011, “come on!”