An Overview of the President's FY 2023 Budget

Moments ago, the Biden Administration unveiled its Fiscal Year (FY) 2023 budget proposal, outlining some of the President’s tax and spending priorities over the next decade. Under the President’s budget, debt would decline relative to current law but grow over time and reach a new record as a share of the economy. Specifically, it would rise from 102 percent of Gross Domestic Product (GDP) at the end of FY 2022 to a record 107 percent of GDP by the end of 2032, compared to 110 percent under the Office of Management and Budget's (OMB) baseline.

While much of the President's agenda is reflected in an unspecified placeholder for a final reconciliation deal based on the House-passed Build Back Better Act, the specific policies in the budget reduce deficits by over $1 trillion over the next decade. This includes roughly $1.4 trillion of new spending that's more than offset by nearly $2.5 trillion of revenue increases and $95 billion of interest savings.

Sources: Office of Management and Budget.

What Would the President's Budget Mean for Spending, Revenue, Deficits, and Debt? 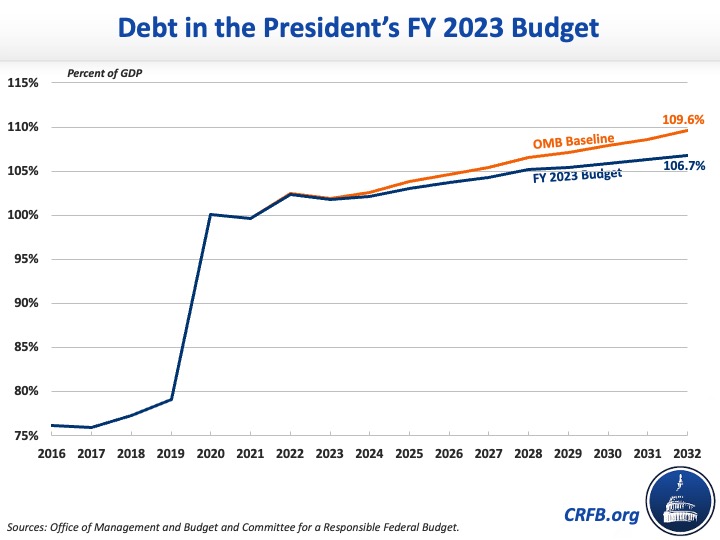 The Committee for a Responsible Federal Budget has put out a press release and will publish a more detailed analysis of the President’s FY 2023 budget later today and over the course of the next several weeks. Our analyses of past budget proposals can be found here.

Note: This analysis has been updated to correct several calendar year figures that were originally described as fiscal year figures.