As lawmakers return from recess and move onto the fall's agenda, tax reform remains the top priority for both Congress and the Administration. The tax code hasn't been reformed in more than 30 years, and it is in desperate need of a tune up. But reforming the tax system is going to require tough tradeoffs.

Below is a modified version of our paper "Five Reasons to Pay for Tax Reform," which we published in February. It has been updated to reflect new research and evidence showing that tax reform that doesn't add to the debt is much better for the national debt, deficits, and the economy.

Tax reform is at the top of the agenda in Washington. This is encouraging because individual and corporate income taxes are overly complex, anti-competitive, inefficient, costly to comply with, and littered with nearly $1.6 trillion of deductions, credits, and other tax preferences. Creating a tax code that is more straightforward, fair, efficient, and competitive will boost economic growth, which would not only improve the nation’s fiscal situation but lead to higher wages and incomes.

In this paper, we discuss five reasons tax reform should be paid for. 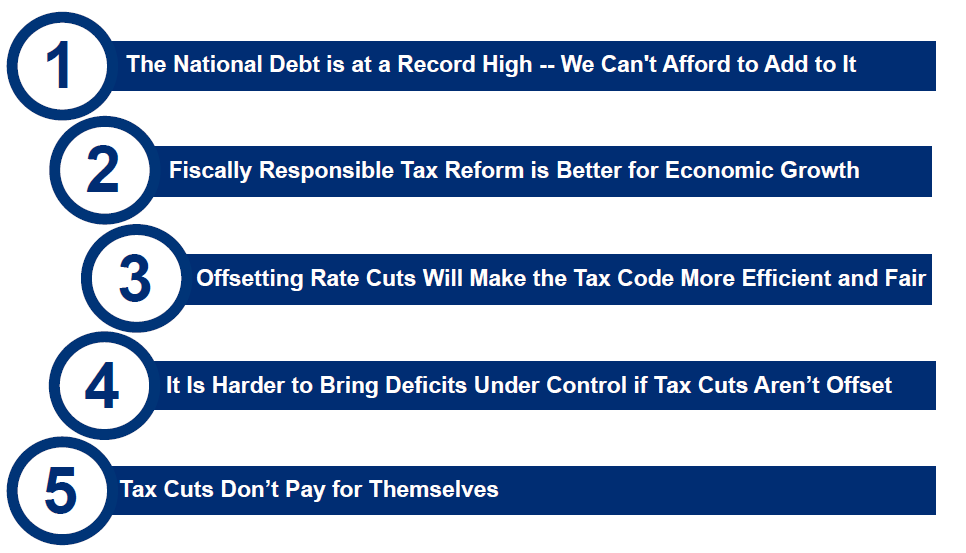 While tax reform is a vital part of any economic growth strategy, so is bringing the national debt under control. Tax reform should contribute to, not detract from, efforts to put the debt on a more sustainable path relative to the economy.

As a share of the economy, debt held by the public is currently 77 percent of Gross Domestic Product (GDP), which is higher than it’s been since the end of World War II and nearly twice the average of the last half-century. On its current path, debt will exceed the size of the economy by 2033 and exceed 150 percent of GDP by 2047. High and rising debt threatens economic and wage growth, the government’s ability to respond to new challenges, and the nation’s fiscal sustainability. Policymakers need to reduce the debt, not add to it. While comprehensive tax reform can promote economic growth, debt-financed tax cuts are less likely to be effective and may even slow growth. Higher government debt squeezes out private investment, which over time can do more to hurt the economy than lower tax rates do to boost it. The best way to ensure tax reform promotes economic growth is to reduce both tax rates and budget deficits. In fact, the Joint Committee on Taxation estimated in 2011 that tax reform producing $600 billion of net revenue would produce about one-third more growth over the long run than revenue-neutral tax reform with the same structure. Currently, the tax code contains almost $1.6 trillion in special tax breaks or tax expenditures that complicate the code, distort decision making, pick winners and losers, and tend to be regressive. If tax reform is paid for, policymakers will have to reduce these tax breaks in order to offset rate reductions. In doing so, policymakers can create a simpler and fairer tax code that strengthens the overall economy and leads businesses and individuals to make decisions based on what makes sense for them rather than what gives them the biggest tax benefit. The actual amount of cuts needed to balance the budget depends on how steeply lawmakers cut spending. If lawmakers enact steeper cuts, delaying more of the reductions to later years, the ten-year averages are smaller but the ultimate cuts in the final year are larger. While well-designed tax cuts can promote economic growth that leads to more revenue, there is no realistic scenario that this “dynamic revenue” will be as large as the initial tax cut. In order for a tax cut to pay for itself, it would need to grow the economy about $4 to $6 for every dollar of revenue loss. There is no historical case of a tax cut achieving this goal. Economic analysis has shown that tax cuts can only pay for themselves when the top federal rate is much higher than it is today – many economists believe the top rate would need to be above 60 percent. At best, the dynamic revenues from growth could pay for a fraction of the tax cut’s cost. Given our fiscal situation, tax cuts should be fully paid for without dynamic revenue so that the gains from economic growth can be used to address our mounting debt.

In one illustrative example from the Congressional Budget Office (CBO), at best one-quarter of the cost of a broad-based cut in individual rates could be offset by economic growth over a decade, and even that assumes future tax increases will ultimately be enacted to stabilize the long-term fiscal picture. At worst, CBO finds the cost of a tax cut would increase as higher debt slowed economic growth. Likewise, recent estimates by the Tax Policy Center and the Penn Wharton Budget Model show that dynamic effects would marginally reduce the revenue loss in the first decade but significantly increase it over the long run because of the economic consequences of higher debt. Tax reform and growing the economy should be national priorities. But adding to the debt stands in the way of sustained economic growth, history has proven that tax cuts don’t pay for themselves, and economic analysis suggests they would do less to grow the economy than well-designed fiscally responsible tax reform would.

Tax reform is critical to growing our economy, and it would ideally be part of a broader budget deal to bring the nation’s finances under control. With debt as a share of the economy higher than any time since just after World War II, this nation needs a long-term budget plan. Unpaid-for tax cuts would make that even more difficult.