Reconciliation is a special legislative process created as part of the Budget Act of 1974. It is intended to help lawmakers make the tax and mandatory spending changes necessary to meet the levels proposed in the congressional budget resolution.

Reconciliation instructions are put forward as part of a concurrent budget resolution that is adopted by both chambers of Congress. These instructions set cost or savings targets for the Congressional committees, with instructions covering mandatory spending, revenue, or debt limit changes. Following these instructions, committees of jurisdiction identify specific policies to meet these goals in the form of a reconciliation bill, which can be enacted on a fast-track basis.

Reconciliation bills are privileged in a number of ways, including a 20-hour limit on debate in the Senate, a non-debatable motion to proceed to the bill, and a strict germaneness test for amendments in a process known as “vote-a-rama” that occurs after regular debate has ended. 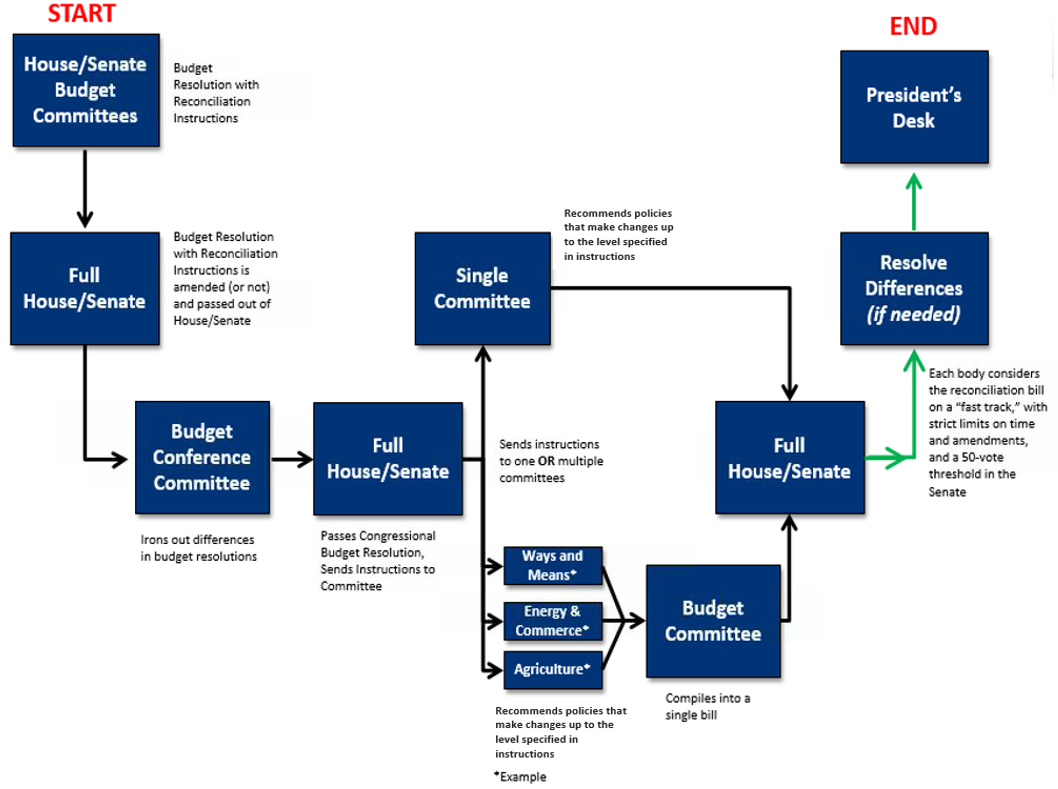 Reconciliation bills are allowed to either decrease or increase the deficit over the time period covered by the budget resolution. It is also possible for a reconciliation bill to contain provisions with costs as well as savings, as long as the net effect complies with the reconciliation instructions.

In 2007, the Senate adopted the “Conrad rule,” which prohibited reconciliation from increasing deficits. However, the Conrad rule was repealed in the 2015 budget resolution (over CRFB’s objections). Even without the Conrad rule, reconciliation legislation cannot add more to the deficit than what is allowed in the instructions under the budget resolution, though there is no limit on how costly these instructions can be.

Reconciliation legislation is also subject to a number of budget points of order. To avoid a 60-vote point of order, they must comply with the spending and revenue levels in the budget and abide by the Senate “pay as you go” (PAYGO) rule, which prevents legislation from adding to deficits. However, these rules can be changed – or exceptions added – in the budget resolution itself.

Statutory PAYGO can be addressed in separate legislation, subject to a 60-vote threshold. In 2017, a December continuing resolution enacted on the same day as the TCJA removed the tax cuts from the statutory PAYGO scorecard. If PAYGO had not been waived, the resulting sequester would have been large enough to eliminate mandatory programs that are subject to the sequester.

Although reconciliation bills are granted many privileges that are not available to most other legislation, they remain bound by several conditions. Some of these restrictions championed by former Senator Robert Byrd (D-WV) and established in Section 313 of the Budget Act are jointly referred to as the “Byrd Rule.” The Byrd rule disallows “extraneous matter” from a reconciliation bill, including through three major restrictions on reconciliation legislation.

First, reconciliation legislation must only involve budget-related changes and cannot include policies that have no fiscal impact, that have “merely incidental” fiscal impacts, or that increase the deficit if the committee did not follow its reconciliation instructions. For example, during the efforts to repeal and replace the Affordable Care Act (ACA), the Byrd rule prevented lawmakers from repealing the individual health insurance mandate or modifying rules on how much health insurance companies could adjust premiums based on age. Even though both policies would have budgetary implications, they were considered “merely incidental” budget effects. Often, policymakers can identify workarounds to these rules; for example, while they could not repeal the individual mandate, they were able to reduce the penalty to $0 and thus effectively eliminate it.

Reconciliation bills also cannot change Social Security spending or dedicated revenue, which are considered “off-budget.” Non-Social Security policies which indirectly affect benefits or payroll tax revenue do appear to be in order, however.

The Byrd rule provides a “surgical“ point of order that strikes any provisions in violation without blocking the entire bill. However, the Byrd rule can also be waived with 60 votes. Even though this point of order only exists in the Senate, it de facto governs the House too, given that it can be applied to any conference report.

In total, 21 bills have become law through reconciliation, including the 1990 Omnibus Budget Reconciliation Act, the Balanced Budget Act of 1997, the 2001, 2003, and 2017 tax cuts, and portions of the Affordable Care Act of 2010. Some of these efforts, such as the 1990 and 1993 Omnibus Budget Reconciliation Acts, have produced significant deficit reduction (each saved nearly $500 billion over five years), while others, such as the 2001, 2003, and 2017 tax cuts, have increased deficits. We have a published a comparison of reconciliation bills before 2008 here.

Can reconciliation be used for further COVID relief?

Reconciliation can be used to enact further economic relief or stimulus in response to COVID-19 pandemic but with some limitations.

Due to the Byrd rule, a COVID relief package could not add to the deficit beyond the budget resolution window, could not change Social Security, and could not include policies that are non-budgetary in nature. In addition, COVID relief enacted through reconciliation would likely preclude the use of discretionary spending.

Many COVID relief policies under discussion would easily meet these criteria. For example, a temporary expansion and extension of unemployment benefits, one-time rebate checks, an increase in Paycheck Protection Program (PPP) funding, or tax credit expansions could all be enacted under reconciliation.

Other COVID relief policies could likely be enacted under reconciliation with some adjustments. For example, lawmakers could still issue aid to states and dedicate resources toward the COVID response itself, but likely not through the discretionary appropriations used in recent COVID relief bills. Instead of new discretionary appropriations, reconciliation would have to rely on mandatory allocations or mandatory formula-based funding.

A final category of COVID relief would have a more difficult time making it through reconciliation. Based on current rules and precedent, it is unlikely that policymakers could raise the minimum wage or mandate that businesses offer paid sick leave through reconciliation. Changes to various rules and requirements for existing programs such as the Paycheck Protection Program might also be difficult to pass.

Even in these cases, policymakers may be able to identify workarounds or persuade (or possibly even overrule) the parliamentarian to rule such policies as germane.

Many elements of President Biden’s agenda could be enacted through reconciliation. (See our comprehensive list of his campaign proposals here.)

In particular, nearly all of his proposed tax increases – other than changes to the Social Security payroll tax or some tax compliance measures – would qualify.

Many spending increases, especially expansions to existing programs, would also qualify. However, these increases could not be enacted on a permanent basis unless fully offset over the long-run by the same committee proposing the spending.

Changes to discretionary spending would be more challenging to enact through reconciliation, though in many cases could be done by adjusting how the spending is structured. A major infrastructure package, for example, would likely need to be composed of mandatory spending and tax provisions rather than new discretionary appropriations.

Permanent increases in infrastructure spending would be particularly challenging since the transportation committees have jurisdiction over only a relatively limited set of potential offsets, and the financing is typically under the jurisdiction of the tax-writing committees. Even one-time or temporary spending increases could present some challenges, since infrastructure spending tends to take several years to be fully spent and thus could increase deficits beyond the budget window even if allocated in the near term.

How many sets of the reconciliation bills can be enacted?

Ordinarily, Congress enacts only one reconciliation bill each year based on the budget resolution adopted that year, although it is possible to consider separate bills for revenue, spending, and the debt limit (separate revenue and spending bills were enacted in 1982, 1997, and 2006). However, this year it will be possible to enact at least two sets of bills.

Since Congress failed to adopt a FY 2021 budget resolution last year, they could issue one set of reconciliation instructions by passing that budget and a second by adopting a FY 2022 budget resolution later in the year. Republicans took this approach in 2017, when a FY 2017 resolution was adopted in January 2017 with instructions used to attempt to repeal parts of the Affordable Care Act (which failed in the Senate) and a FY 2018 resolution was adopted in late October 2017 with instructions used to enact the bill commonly known as the Tax Cuts and Jobs Act (although the Byrd Rule was used to prohibit the law from officially being renamed that).

It appears possible that Congress could issue even more instructions by adopting a second budget resolution for each year or a resolution for future years, although those procedures have never been used to enact reconciliation legislation and break from precedent.

Budget reconciliation can be a powerful tool to enact reforms of mandatory spending and revenues for deficit reduction. For COVID relief, policymakers should consider the size of the economic output gap they are seeking to fill, as well as the potential effects of any package on output, employment, poverty, household income, business stability, public health, and long-term growth.

Other spending, and especially permanent spending, should be fully offset in light of today’s high and rising debt levels. For these measures, we believe Congress should abide by the Conrad rule in force through the last Democratic use of reconciliation, offsetting the cost of the package over the decade. Ideally, they would go further and use reconciliation as an opportunity to put in place revenue increases and cost reductions to slow the growth of debt over the long term.