Analysis of the President's FY 2023 Budget

The Biden Administration released its Fiscal Year (FY) 2023 budget proposal today, outlining some of President Biden’s tax and spending priorities over the next decade. The budget relies on an unspecified budget-neutral placeholder reflecting the President’s “Build Back Better” agenda to spend on climate and social programs while lowering prescription drug costs and raising revenue. The budget also includes substantial tax and spending increases.

Based on the Administration’s own estimates and assuming the Build Back Better agenda is indeed budget neutral, under the President’s budget:

President Biden should be commended for putting forward a budget that calls for deficit reduction. Unfortunately, the budget is short on details and does too little – and in some cases nothing – to tackle inflation, lower health care costs, secure trust funds, or put the debt on a sustainable downward path over the long term.

Debt under the President’s budget would grow to a new record as a share of the economy by the end of the decade. According to estimates within the budget – which assumes the Build Back Better agenda is budget-neutral – federal debt held by the public would grow by $14.7 trillion from the end of FY 2022 to 2032, from $24.8 trillion to $39.5 trillion. Relative to the economy, debt would grow from 102.4 percent of GDP at the end of FY 2022 to a record 106.7 percent by 2032. 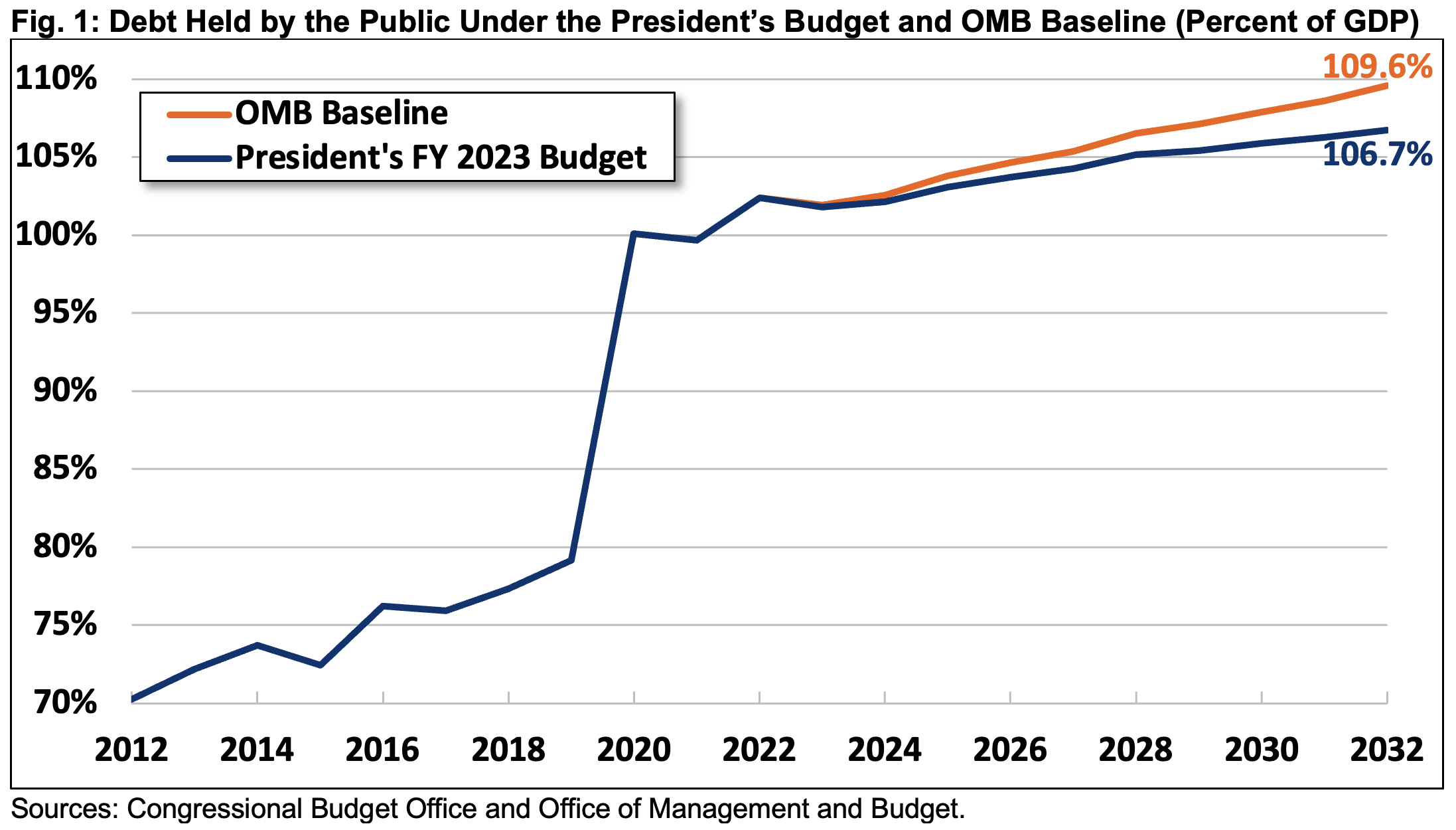 Proposals in the President’s FY 2023 Budget

Much of the President’s agenda is captured in his Build Back Better agenda, which is discussed but not specified in the budget. The budget also includes an additional $1.66 trillion of spending increases, $2.61 trillion of offsets, and $95 billion of interest savings. Much of this spending is on veterans, public health, and education. The offsets come almost entirely from revenue increases – mainly on corporations and high-income, high-wealth households. Overall, these policies would reduce deficits by a combined $1.05 trillion. 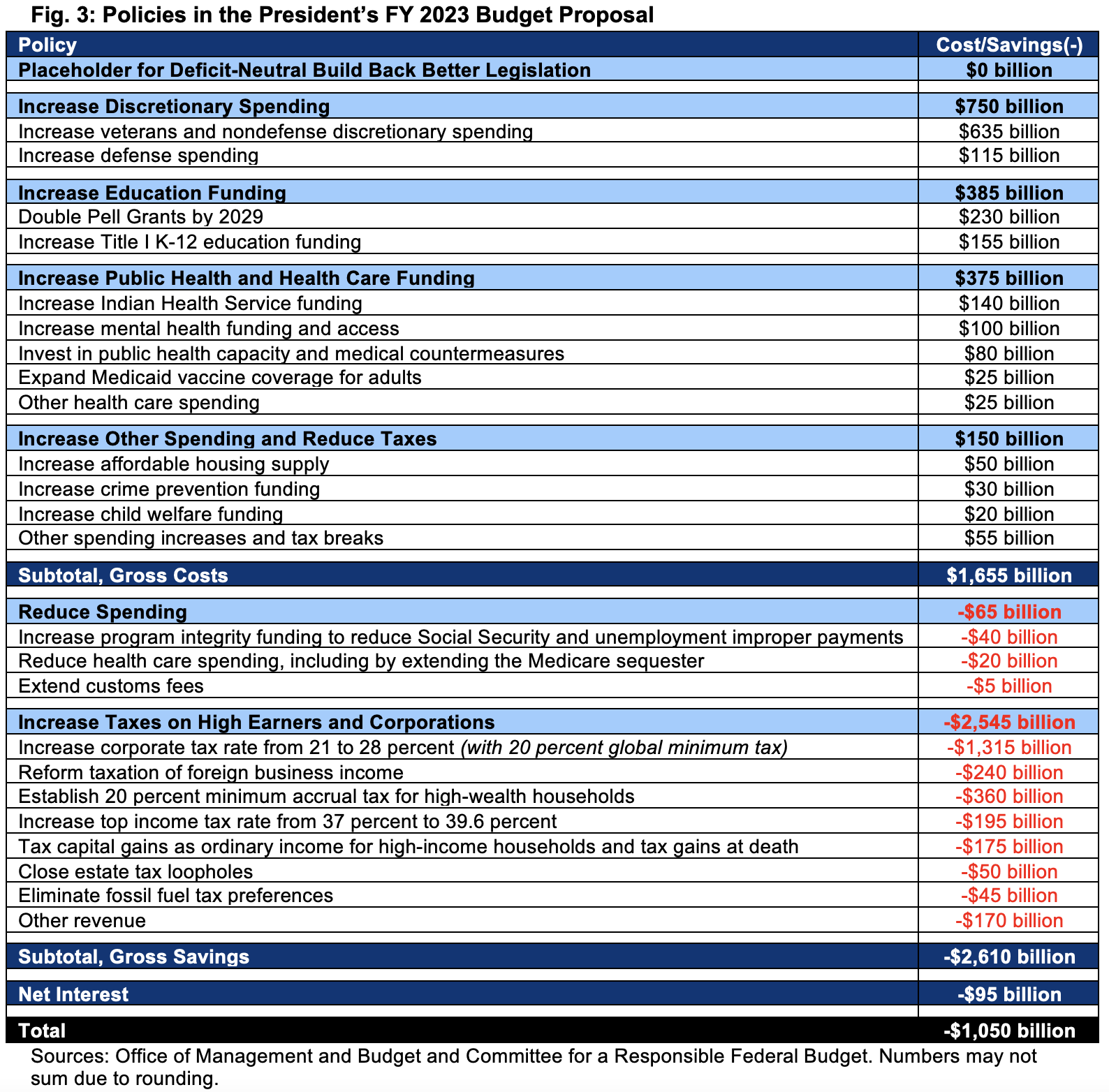 Economic Assumptions in the President’s Budget

For calendar year 2022, the budget forecasts Consumer Price Index (CPI) inflation of 2.9 percent and GDP price index inflation of 2.4 percent. By comparison, the Federal Reserve is forecasting 4.3 percent Personal Consumption Expenditure (PCE) inflation. The budget projects inflation will normalize by 2023 at 2.3 percent per year for CPI and 2.0 percent for the GDP price index; the Federal Reserve projects inflation to remain somewhat elevated until at least 2025.

We are pleased that President Biden has put forward a budget that calls for offsetting new spending and reducing budget deficits. Reducing near- and long-term deficits can help to bring rapid inflation under control and will be key to putting the national debt on a sustainable path. The President also deserves credit for putting forward a number of new revenue proposals, which could be used to fund new initiatives or reduce deficits going forward.

However, we are disappointed about the lack of detail in the President’s budget and that the debt would continue to rise to record levels under the budget. It would be far preferable to first put in place a plan to significantly improve our fiscal position, before implementing new policies that would absorb any new revenues.

While we understand the sensitivity of ongoing negotiations over the President’s Build Back Better agenda, they represent the core of the President’s policy priorities, so it is impossible to understand the true impact of his budget or agenda without knowing how these tax and spending changes fit into it. The budget is also, disappointingly, silent on how it will address various expiring provisions that could substantially worsen the fiscal outlook.

Even assuming these provisions are allowed to expire and the Build Back Better agenda is truly budget neutral, without relying on arbitrary expirations or other budget gimmicks, the budget does too little to help bring inflation under control or reduce long-term deficits.

Under the budget’s own estimates, debt would rise to a new record as a share of the economy. Meanwhile, the budget would do next to nothing to address the looming insolvency of the Social Security, Medicare, and  Highway Trust Funds. Nor does it include measures outside of Build Back Better to slow health care cost growth, which is a key driver of rising long-term debt.

Failure to make our entitlement programs sustainable and put the debt on a clear downward path over the long run will ultimately slow economic growth, increase the cost of living, reduce the nation’s flexibility to address future needs, leave benefit levels of important support programs in jeopardy, increase the ultimate risk of a fiscal crisis, and leave us more vulnerable to future economic and geopolitical emergencies.

We appreciate the President’s call to not only pay for new initiatives, but also to reduce the deficit, and we hope Congress builds on this example by combining the best parts of the President’s budget with other reforms in order to truly restore the country’s fiscal and economic health.