Q&A: Gross Debt Versus Debt Held by the Public

On January 31, 2022, the federal government's gross debt exceeded $30 trillion for the first time. This mark serves as an important reminder of the nation's unsustainable rising national debt. At the same time, the nominal amount of gross debt is just one of a few measures of debt and is actually considered less economically meaningful than some other measures such as debt held by the public as a share of Gross Domestic Product (GDP). This explainer will lay out everything you need to know about the different measures of debt and what they mean for the government's fiscal situation.

What is the difference between debt and deficits?

Deficits are how much the country borrows each year, while debt is the total amount it has borrowed. In other words, the deficit measures the flow of borrowing while debt measures the total stock of borrowing. The federal government runs a deficit when outlays (i.e., spending) exceed revenue, and it must borrow money to make up the difference. When revenue exceeds outlays, the government runs a surplus. The debt is the sum of all past deficits and surpluses (plus additional borrowing from federal credit and related programs) and reflects how much the government has borrowed over its history.

What is the gross federal debt? How big is it?

As of today, the gross debt is $30.0 trillion, up from $23.5 trillion in February 2020 before the COVID-19 public health and economic crisis necessitated massive short-term borrowing. The Congressional Budget Office (CBO) projects gross debt to rise to roughly $41.0 trillion by the end of Fiscal Year (FY) 2031. As a share of the economy, gross debt is currently around 125 percent of GDP and is expected to fall to 122 percent of GDP by 2031.

What is debt held by the public? How big is it?

What is intragovernmental debt? How big is it?

As of today, intragovernmental debt totals $6.5 trillion, up from $4.8 trillion a decade ago. However, it is projected to fall to $5.1 trillion by the end of FY 2031, as some major trust funds will soon be forced to begin selling off the debt they hold in order to continue covering their expenses.

Which is a more important measure of debt, gross debt or debt held by the public?

Most economists regard debt held by the public – particularly as a share of GDP – as the most economically meaningful measure of debt. Debt held by the public measures the amount of U.S. debt held by entities other than the federal government and traded publicly. It is thus relevant for understanding the extent to which debt is providing fiscal stimulus, crowding out private investment, influencing interest rates, and consuming fiscal space.

Gross federal debt also has some significance as one measure of the government's total obligations. With some minor adjustments, gross debt is also used to determine when the government has or will hit the national debt limit.

Are there other measures of federal debt?

Another measure of debt is debt subject to the limit. This measure, which matters for determining when the federal government reaches the statutory debt ceiling, is broadly similar to gross federal debt. However, debt subject to the limit excludes debt issued by agencies other than Treasury (such as the Federal Financing Bank or the Tennessee Valley Authority) and is adjusted for the unamortized discount on certain Treasury securities, making it about $30 billion lower than gross debt.

Broader measures of the federal government's financial condition take liabilities other than debt into account. According to the Fiscal Year 2020 Financial Report of the United States Government, the U.S. has $32.7 trillion of liabilities, with publicly-held debt comprising about 65 percent of those liabilities and accrued benefits for veterans and federal employees making up most of the remainder. The government also has some softer liabilities (often referred to as "obligations") to pay future Social Security and Medicare benefits in excess of revenue under current law. The present value of these unfunded social insurance obligations over the next 75 years is about $65.5 trillion, bringing the government's total liabilities to $65.5 trillion. Net of government assets, the government's net position under this measure is -$98.2 trillion.

Who owns the national debt held by the public?

Of the $23.6 trillion of debt held by the public, we estimate about 34 percent is owned by foreign entities, 43 percent by private and public domestic entities, and 23 percent by the Federal Reserve Bank. The Federal Reserve has significantly expanded its Treasury holdings since the COVID-19 public health and economic crisis began in 2020.

Foreign holdings come from a mixture of foreign individuals, businesses, banks, and governments. Of the roughly $7.9 trillion of foreign-held debt, 17 percent ($1.3 trillion) is held by Japan and 14 percent ($1.1 trillion) is held by China. The next largest holders are the United Kingdom, Ireland, and Luxembourg, who each hold between $320 billion and $560 billion of U.S. debt. On a combined basis, the Eurozone holds about $1.3 trillion, and Organization of Petroleum Exporting Country (OPEC) member nations together hold about $250 billion.

In terms of the roughly $10.2 trillion of domestic holdings not held by the Federal Reserve, a large share is held by the financial sector. Mutual funds hold about 36 percent of domestic debt holdings not held by the Federal Reserve, depository institutions hold about 15 percent,  private pension funds hold 9 percent, and insurance companies own just over 4 percent. About 14 percent is held by state and local governments, who invest in "State and Local Government Series" securities as a way to comply with federal tax laws and anti-arbitrage regulations when they have funds from issuing tax-exempt bonds, and another 4 percent is held by pension funds for their employees. About 1 percent is held by the owners of savings bonds, which are sold directly by the Treasury and are not traded on the private market. The remaining 17 percent is held by other investors, including households, nonfinancial businesses, and government-sponsored enterprises (GSEs). 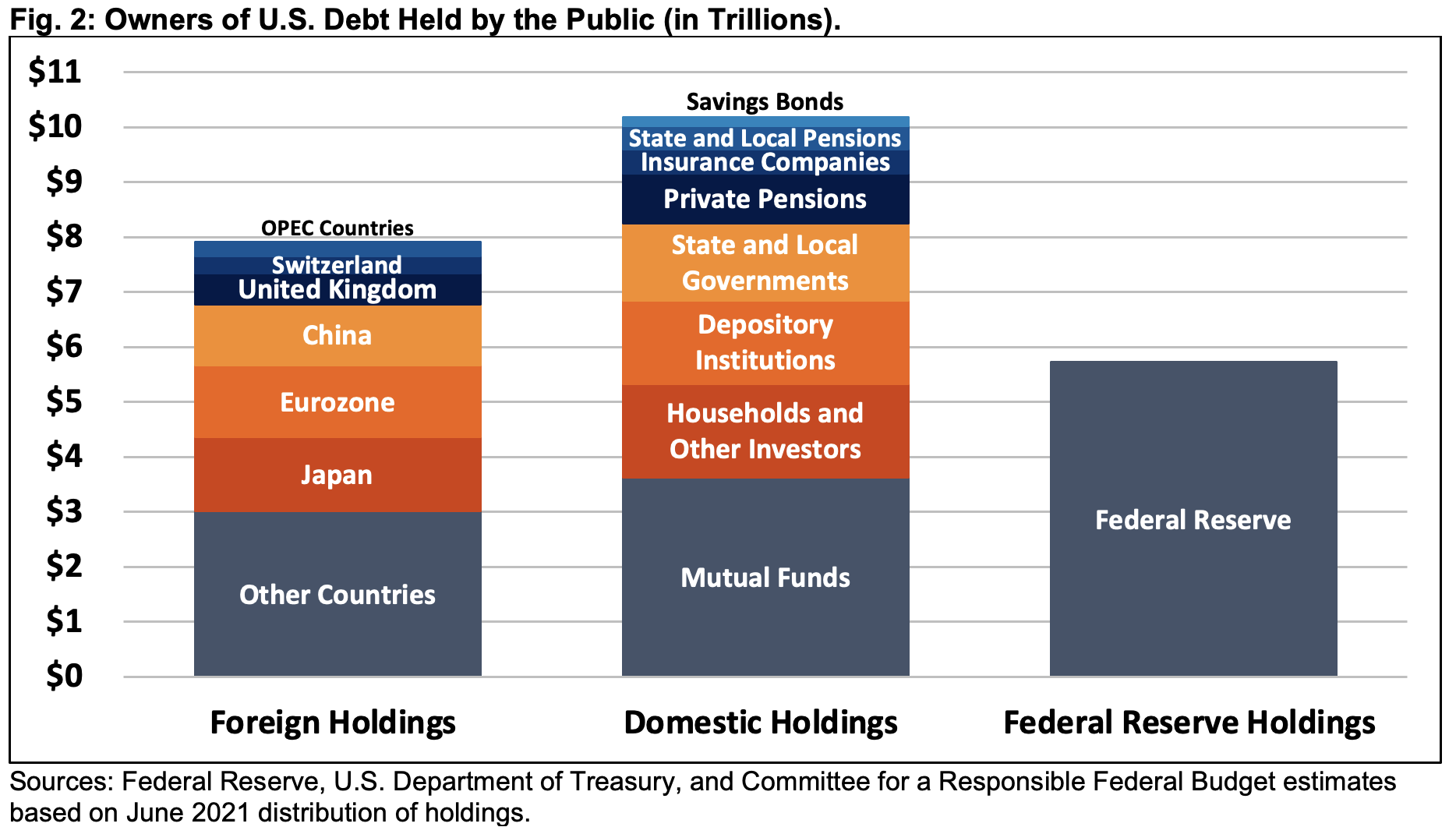 Finally, the U.S. Federal Reserve currently holds $5.7 trillion  of government debt (not including debt held under repurchase agreements). Prior to the COVID-19 public health and economic crisis, the Fed held only about $2.5 trillion in federal debt. When the crisis hit, the Fed embarked on an aggressive round of quantitative easing, buying trillions of dollars in Treasury and other securities using newly created money in the hope of stimulating the economy. In November 2021, the Federal Reserve announced it would begin scaling back its quantitative easing program by reducing its assets purchases by $15 billion per month (until then, the Fed had been purchasing about $120 billion in assets per month) with the goal of ending its quantitative easing program by the middle of 2022. Still the Fed’s debt holdings are more than double their pre-COVID level.

What is the composition of intragovernmental debt?

Most of the $6.5 trillion of intragovernmental debt is held in government trust funds. About $2.8 trillion is held in the Social Security Old Age and Survivors Insurance (OASI) trust fund in the form of special issue securities that are expected to be redeemed within the next 15 years or so. A majority of the remaining amount comes from federal civilian and military retirement trust funds, which are projected to continue accumulating assets in order to notionally fund future retirement costs. Smaller amounts come from the Department of Defense’s Medicare Eligible Retiree Fund,  Medicare's Hospital Insurance and Supplemental Medical Insurance trust funds, the Highway Trust Fund, the Deposit Insurance Fund, and the Social Security Disability Insurance (SSDI) trust fund, among other sources. 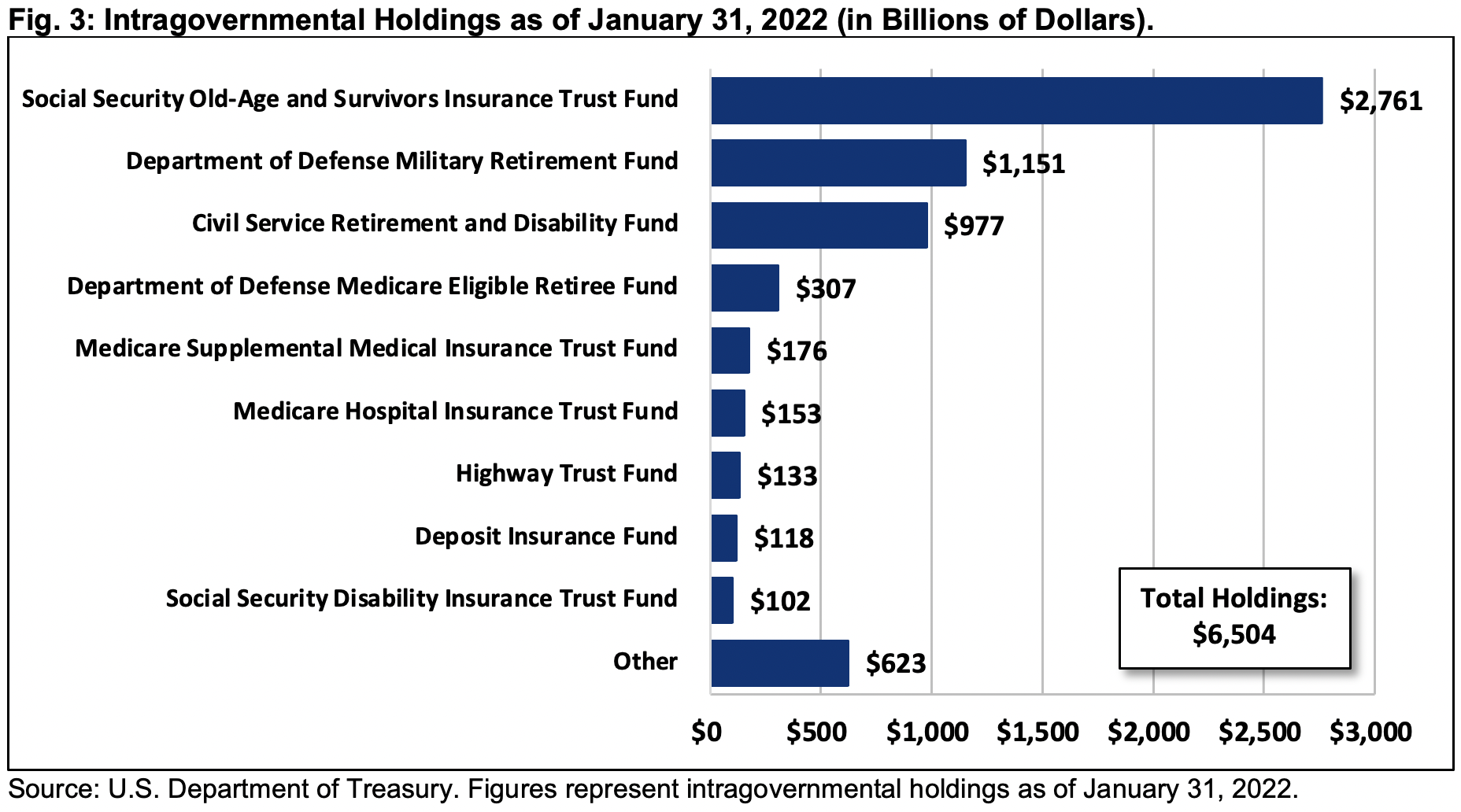 When will gross debt reach the statutory limit?

Since 1917, the federal government has had a legal limit on the amount of debt it can accrue. The debt limit was most recently reinstated on August 1, 2021 at $28.43 trillion, the level of outstanding debt that day. On December 16, 2021, lawmakers increased the debt limit to $31.38 trillion. During the intervening period, the Treasury Department was able to use "extraordinary measures."

When will debt held by the public reach its limit?

There is no legal limit to debt held by the public, nor is there a precise point where it starts to represent an economic threat. However, the larger the debt held by the public is as a share of the economy, the more economic damage it can create, the less fiscal space policymakers have, and the higher the risk there is of a fiscal crisis. With a growing national debt, a greater share of private savings would be used to purchase government debt instead of going towards private investments that increase productivity and long-run economic growth. Higher debt also means policymakers will have less ability to borrow easily in response to unforeseen emergencies or economic downturns. Finally, a larger and growing public debt increases the risk that investors could at some point become unwilling to finance government borrowing without charging substantially high interest rates, which could lead to a debt sell-off and cause a fiscal crisis.

Both gross and public debt are at all-time highs in nominal dollars, which is perhaps not surprising since the federal government has been running deficits for each of the past 20 fiscal years. As a percent of GDP, both are high by historical standards. Debt held by the public is currently around 98 percent of GDP, which is higher than any time in history other than in fiscal years 1945, 1946, and 2020, when unprecedented borrowing occurred to finance the World War II effort and to fight COVID-19. Even during those two periods, the record for debt was 106 percent of GDP in 1946 and 100 percent in 2020, both of which the federal government will surpass by 2031. 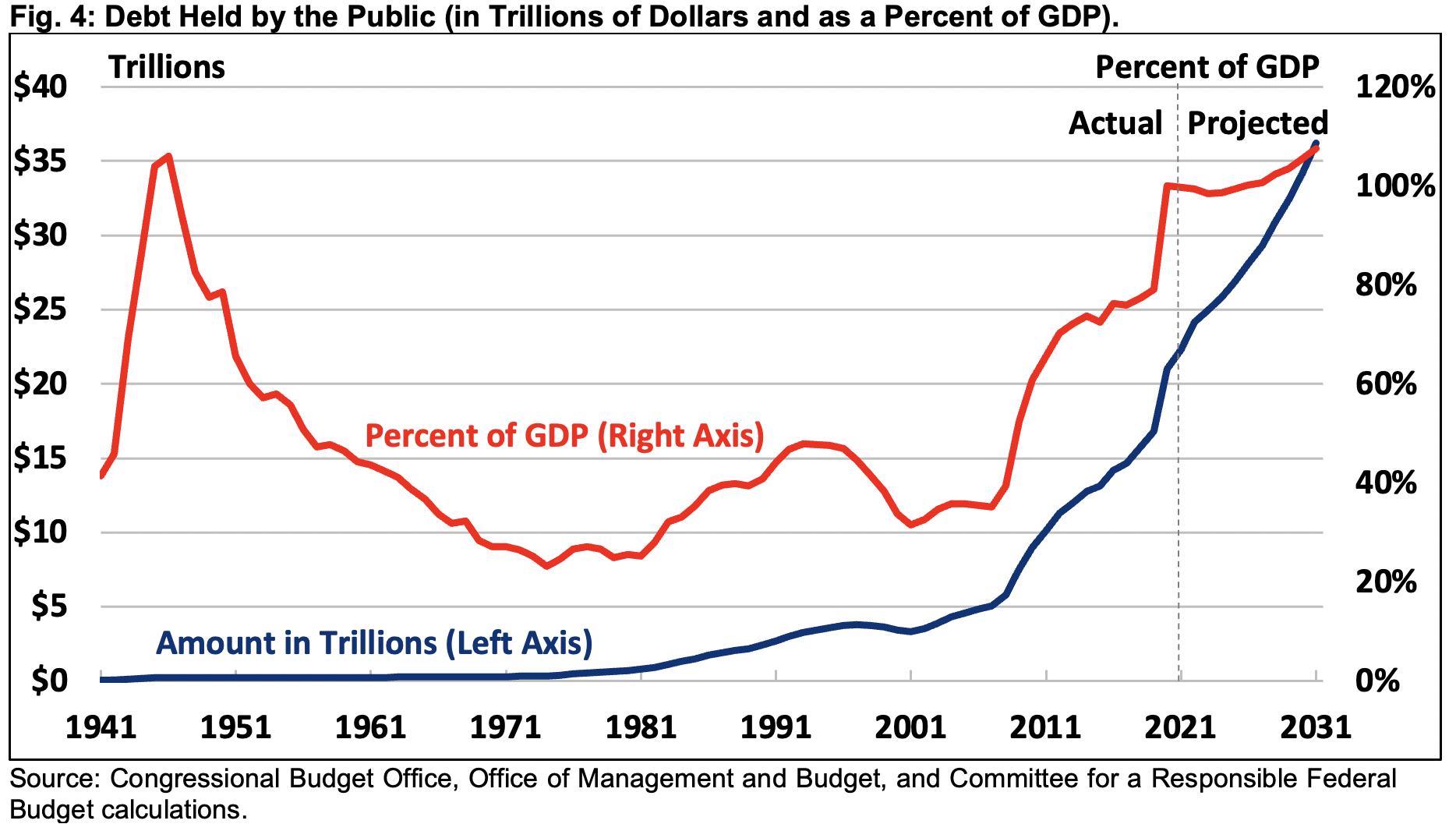 The ratio of publicly held debt to GDP is a better measure of a country's fiscal situation than just the nominal debt figure because it shows the burden of debt relative to the country's total economic output and therefore its ability to finance or repay it. This measure also allows for an apples-to-apples comparison of one country's fiscal situation over time or multiple countries' debt burden in a meaningful way. A large nominal dollar debt is less of a problem if a country has a large economy and can easily repay it. For example, debt held by the public in 1946 was about $242 billion, or one percent of what it is today. But with a GDP of just $228 billion, debt held by the public was 106 percent of the economy, or roughly nine percentage points higher than its current level.

How do budgetary changes affect debt?

Since public and gross debt are different measures of debt, changes to the federal budget can affect each measure differently. Any change to the unified federal budget that affects deficits will affect debt held by the public as well; for example, a law that reduces ten-year deficits by $50 billion will generally reduce public debt by $50 billion. The same is not necessarily true of gross debt since any change that affects a program with a trust fund would have offsetting effects on gross debt. For example, a policy change that increases Social Security's trust fund by $50 billion would reduce debt held by the public by a similar amount, but increase intragovernmental debt by $50 billion and therefore have little or no impact on gross federal debt.