This paper has been updated here.

In the absence of a budget resolution, each chamber may enact a deeming resolution that sets the 302(a) allocation for that chamber. The Bipartisan Budget Act of 2018 gave the Chairmen of the Budget Committees authority to set the 302(a) allocation for the Appropriations Committees for FY 2018 and FY 2019 at the statutory discretionary spending caps that the law established. 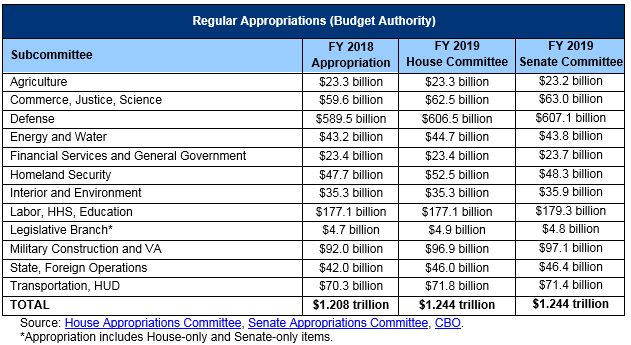 This table excludes funding not subject to the spending caps, such as Overseas Contingency Operations (OCO) or disaster funding. The Bipartisan Budget Act of 2018 allows for $77 billion in OCO funding in FY 2019, slightly higher than the President’s request of $69 billion.

Each subcommittee must propose a bill that ultimately must pass both chambers of Congress and be signed by the President in order to take effect. Although the budget process calls for 12 individual bills, many of them are often combined into what is known as an omnibus appropriations bill, and sometimes a few are combined into what has been termed a minibus appropriations bill.

The 1974 Budget Act calls for the President to submit his or her budget request by the first Monday in February and for Congress to agree to a concurrent budget resolution by April 15. The House may begin consideration of appropriations bills on May 15 even if a budget resolution has not been adopted, and it is supposed to complete action on appropriations bills by June 30. However, none of these deadlines are enforceable, and they are regularly missed. The practical deadline for passage of appropriations is October 1, when the next fiscal year begins and the previous appropriation bills expire. For a full timeline of the budget process, read more here.

A shutdown represents a lapse in available funding, and during a shutdown the government stops most non-essential activities related to the discretionary budget. To learn more see Q&A: Everything You Should Know About Government Shutdowns.

The House Budget Committee has not yet officially deemed its 302(a) allocation levels and is still debating how to proceed with a FY 2019 budget resolution. The House Appropriations Committee has provided its subcommittees with official 302(b) numbers, and the panel has approved or released eight of its bills.