This paper has been updated here.

Under current law, after the President submits the Administration’s budget proposal to Congress, the House and Senate Budget Committees are each directed to report a budget resolution that, if passed by their respective houses, would then be reconciled in a budget conference (see Q&A: Everything You Need to Know About a Budget Conference).

In the absence of a budget resolution, each chamber may enact a deeming resolution that sets the 302(a) allocation for that chamber. The Bipartisan Budget Act of 2018 gave the Chairmen of the Budget Committees authority to set the 302(a) allocation for the Appropriations Committees for FY 2018 and FY 2019 at the statutory discretionary spending caps set by the law. For the upcoming year (FY 2020), Congress may also set the 302(a) allocation using an alternative method, depending on whether lawmakers enact legislation to address the statutory spending caps. The House adopted a rule on April 9 that deemed the 302(a) level for FY 2020 that exceeds the caps, while the Senate Budget Committee approved a budget resolution in March that assumes the caps remain at their statutory levels while allowing them to be adjusted if an agreement is reached. 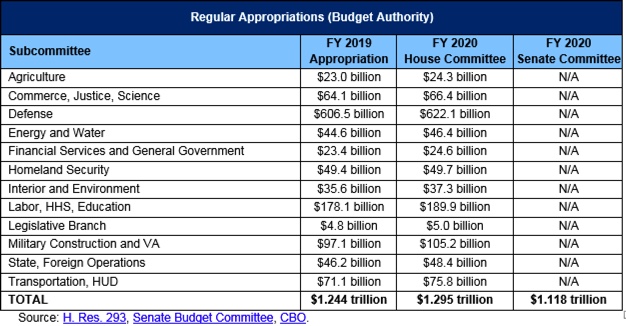 The 1974 Budget Act calls for the President to submit his or her budget request by the first Monday in February and for Congress to agree to a concurrent budget resolution by April 15. The House may begin consideration of appropriations bills on May 15 even if a budget resolution has not been adopted, and it is supposed to complete action on appropriations bills by June 30. (The process is generally designed for the House to take the lead on appropriations and the Senate to follow.) However, none of these deadlines are enforceable, and they are regularly missed. The practical deadline for passage of appropriations is October 1, when the next fiscal year begins and the previous appropriation bills expire. For a full timeline of the budget process, read more here.

Congress began appropriations work for FY 2020 in March. Lawmakers have been discussing another budget deal to raise discretionary spending caps for FY 2020, but it is currently unclear whether such a deal would complement a budget resolution or supersede it.

The enactment of the 2018 Bipartisan Budget Act increased defense and non-defense discretionary spending caps for FY 2019 at $1.244 trillion, an increase beyond eliminating the “sequester.” Without a similar deal for FY 2020, spending will revert to sequester levels, which are about $126 billion, or 10 percent, lower than the enacted FY 2019 levels.

The Senate Budget Committee approved its budget resolution on March 28 and set 302(a) levels at $1.118 trillion in accordance with sequester-level caps as put into motion by the Budget Control Act. The House Budget Committee approved a caps increase proposal on April 3 that would set discretionary spending levels at $1.295 trillion for FY 2020, and its leaders have indicated that they will likely forgo a formal budget resolution. The House postponed a scheduled vote on the House Budget Committee legislation, but the chamber adopted a rule that deemed 302(a) levels and allowed appropriations to proceed at the proposal’s $1.295 trillion for FY 2020.

The Senate has not acted on its budget resolution, and leaders in both chambers are reportedly negotiating a plan to increase the spending caps. If such a deal is reached, the Senate Budget Committee’s budget resolution would permit adjustment of discretionary spending levels.

The House Appropriations Committee has begun working on individual appropriations bills assuming spending caps are eventually increased. In the Senate, a 302(a) allocation has not been deemed or agreed to yet, so it is unclear when they will begin working on appropriations.