Time is Running Out to Save Social Security

40 years ago [last] month, President Reagan sent a letter to Congress asking them to “launch a bipartisan effort to save Social Security.”  He quickly established the bipartisan National Commission on Social Security Reform to address the looming financial crisis facing our nation’s public retirement system. The Commission’s recommendations became the basis for bipartisan legislation that passed two years later....Those reforms were substantial, expanding coverage to millions of new workers, raising social security’s payroll tax rate (to its current 12.4 percent) and cutting future benefits by gradually phasing in increases in the age at which retirees could claim full benefits.

Upon insolvency, all beneficiaries regardless of age, income, or need, will face an abrupt, across-the-board benefit cut. SSDI benefits will be cut by 7 percent when its trust fund runs out, while Social Security retirement benefits will be slashed by 27 percent. For a typical new retiree, this means an immediate $7,000 cut in annual benefits (for couples, the cut could be as much as twice as large). 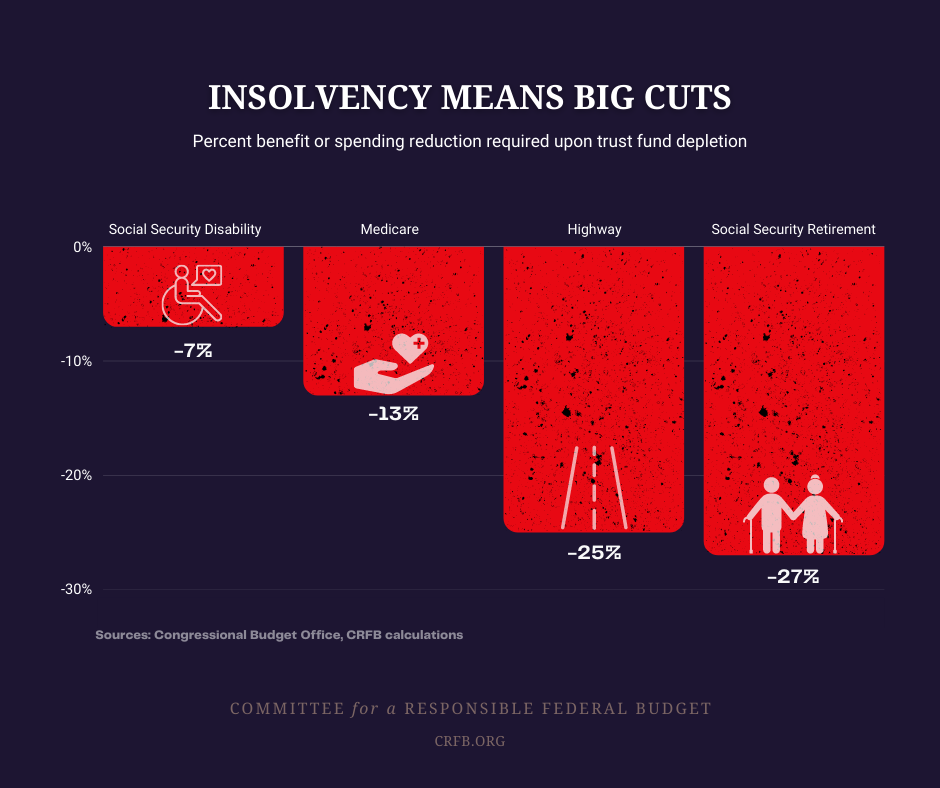 To restore solvency, policymakers must slow Social Security’s cost growth, increase the program’s revenue sources, or do some combination. The longer policymakers wait to act, the more costly and painful the necessary adjustments will be. In our recent paper “The Case for Trust Fund Solutions,” we found that restoring Social Security solvency would not only prevent steep benefit cuts, but could also boost retirement income for those in need, promote work and investment, reduce inequities in the program, and improve the progressivity of Social Security’s tax and benefit structures. Social Security solvency can also improve the debt trajectory and strengthen economic growth.

Many options exist to restore solvency, including comprehensive plans that raise revenue, constrain benefits, or do some combination. Perhaps the most promising way to achieve solvency would be to follow the commission model used four decades ago. The bipartisan Time to Rescue United States Trusts (TRUST) Act would establish rescue committees to address Social Security's old age program, SSDI, Medicare, and the Highway Trust Fund.

As economist Herb Stein once quipped, “if something cannot go on forever, it will stop.” And the rapidly increasing Social Security deficits that are on the horizon cannot go on forever. So, the questions for policymakers are: Will it stop abruptly, creating economic hardship for tens of millions of vulnerable Americans? Or will you find the courage to work together to fix it? As President Reagan said 40 years ago, “for generations of Americans, the future literally rests upon our actions.” And as dysfunctional and fiscally undisciplined as politics in Washington, D.C., may be today, at least we have history on our side to show that action is possible.