As it often does in December, CBO has released its detailed long-term projections for Social Security that build off the ones released with their long-term outlook in June. The projections generally show a worse picture for the trust fund and the 75-year shortfall than the Social Security Trustees expect. Notably, these are the first estimates since the Bipartisan Budget Act reallocated revenue to Social Security Disability Insurance (SSDI) and extended that trust fund's solvency through Fiscal Year (FY) 2021.

The combined Social Security trust fund is projected to be exhausted in 2029, five years earlier than the Trustees expect. At that point, benefits would be cut across-the-board by 29 percent to bring spending in line with revenue. The 2029 date is the median outcome of a range of possibilities, with CBO estimating a 10 percent chance that the trust fund is exhausted by 2026 and a 99 percent chance that it runs out by 2040. 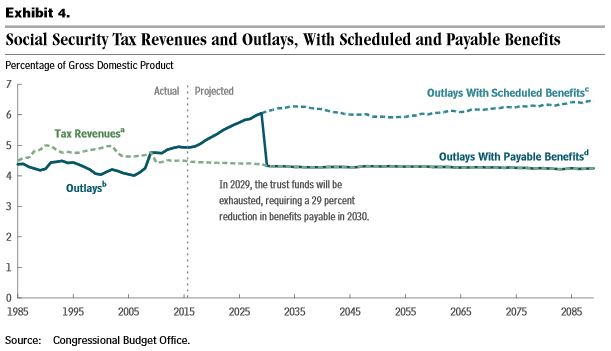 The SSDI trust fund is projected to be exhausted by FY 2021, at which point benefits would be cut by 21 percent. If lawmakers reallocate revenue from the old-age program to extend SSDI solvency, it would bring forward the old-age program's insolvency date from 2030 to 2029. Notably, the SSDI reallocation that lawmakers undertook in the budget deal appears to have moved the old-age insolvency date from 2031 to 2030, since 2031 was the date CBO projected back in June.

Over 75 years, CBO projects a shortfall of 4.37 percent of taxable payroll (1.45 percent of GDP), meaning that it would take a payroll tax increase of around 4.37 percentage points to make Social Security solvent. The deficits over this period will grow rapidly from 1.2 percent of payroll this year to 5.7 percent by 2035, then shrink to 4.6 percent by the 2050s before growing to 6.4 percent by 2089. 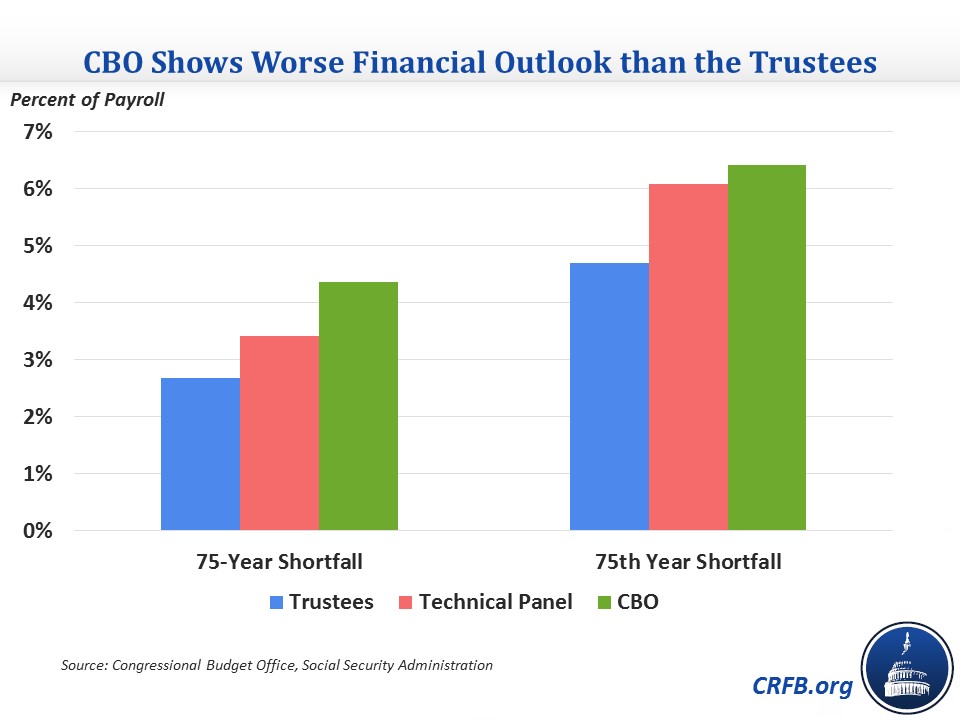 Both economic and demographic assumptions account for the differences between CBO and the Trustees. CBO predicts greater life expectancy improvements, higher disability rates, a greater amount of income inequality (which reduces the amount of income subject to the payroll tax), and lower interest rates (which lower the return on trust fund bonds and affect discount rates). CBO differs from the Technical Panel by still assuming longer life expectancy (though not by as much as the Trustees), higher disability incidence, and more income going to high earners.

CBO's Social Security outlook is much more pessimistic than the Trustees, showing that policymakers may have less than 15 years to shore up the program before the trust fund runs out. They have bought themselves some time with SSDI this year, but they should act swiftly to make the program solvent overall. The sooner they act, the easier it will be for them.