Note: We have updated this paper, please see our Updated Reconciliation 101.

Reconciliation is a special legislative process created as part of the Budget Act of 1974. It is intended to help lawmakers make the tax and mandatory spending changes necessary to meet the levels proposed in the congressional budget resolution.

Reconciliation instructions are put forward as part of a concurrent budget resolution that passes both chambers of Congress. These instructions set cost or savings targets for the congressional committees, with instructions covering mandatory spending, revenue, or debt limit changes. Following these instructions, committees of jurisdiction identify specific policies to meet these goals in the form of a reconciliation bill, which can be enacted on a fast-track basis. 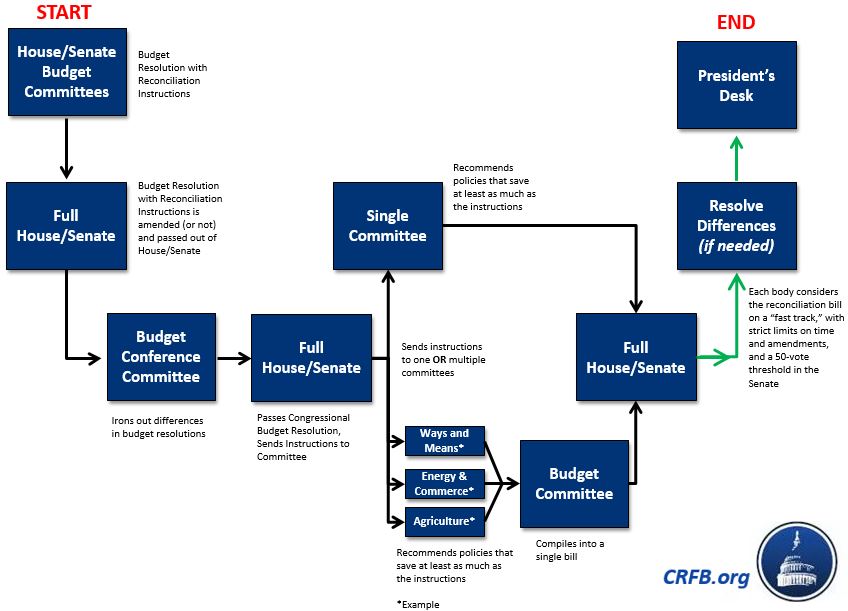 Although reconciliation is often used for deficit reduction, it is technically allowed to either decrease or increase the deficit over the time period covered by the budget resolution. It is also possible for a reconciliation bill to contain provisions with costs as well as savings, so long as the net effect complies with the reconciliation instructions.

Finally, provisions in a reconciliation bill that increase the deficit beyond the period covered by the budget resolution are subject to a 60-vote point of order under the “Byrd rule” unless the costs are offset by savings from other provisions in the bill.

Although reconciliations bills are granted many privileges that are not available to most other legislation, they remain bound by several conditions. Some of these restrictions championed by former Senator Robert Byrd (D-WV) and established in Section 313 of the Budget Act are jointly referred to as the “Byrd Rule.” The Byrd rule disallows “extraneous matter” from a reconciliation bill, including through three major restrictions on reconciliation legislation.

The Byrd rule provides a “surgical“ point of order that strikes any provisions in violation without blocking the entire bill. However, the Byrd rule can also be waived by 60 votes. Even though this point of order only exists in the Senate, it de facto governs the House too, given that it can be applied to any conference report.

In total, 20 bills have become law through reconciliation, including the 1990 Omnibus Budget Reconciliation Act, the Balanced Budget Act of 1997, the 2001 and 2003 tax cuts, and portions of the Affordable Care Act. Some of these efforts, such as the 1990 and 1993 Omnibus Budget Reconciliation Acts, have produced significant deficit reduction (each saved nearly $500 billion over five years) while others, such as the 2001 and 2003 tax cuts, have increased deficits. We have a published a full comparison of past reconciliation bills here.

In addition to the 20 enacted reconciliation bills, 4 reconciliation bills have passed both chambers of Congress but were subsequently vetoed by the president. Most recently, President Obama vetoed legislation passed in 2015 that would have repealed large parts of the Affordable Care Act.

Can reconciliation be used to repeal and replace “Obamacare”?

Reconciliation could be used to repeal and replace some parts of the Affordable Care Act (ACA or “Obamacare”) but could not be used to fully repeal the law and could only be used for replacement policies affecting spending and revenues.

Full repeal would violate numerous parts of the Byrd rule. First, full repeal would cost roughly $500 billion over a decade since the legislation’s Medicare cuts and tax increases exceed the ACA’s new spending, and those costs would grow over time. Second, the provisions increasing costs outside of the budget window would violate the Byrd rule. Further, parts of the ACA contain non-budgetary items that would be subject to the Byrd rule if repealed in a reconciliation bill.

To comply with the Byrd rule, the reconciliation bill passed in 2015 to repeal the ACA largely left in place the legislation’s Medicare reductions. The reconciliation bill also initially delayed but did not repeal the so-called “Cadillac tax” on high-cost insurance plans to avoid revenue loss outside the budget window, but an amendment repealing it was adopted by an overwhelming bipartisan vote and no Byrd rule challenge was raised despite its deficit impact.

Additionally, the legislation left in place a large number of legal requirements in the ACA, including the essential benefits package requirements, the prohibition on insurers denying or charging more for coverage for those pre-existing conditions, the limits on “medical loss ratios,” and other changes that do not have a direct budgetary effect. It also technically retained the legislation’s individual mandates (though it reduced the penalties to $0) and left in place the Independent Payment Advisory Board, which can make Medicare savings recommendations subject to congressional disapproval on a fast-tracked basis.

Can reconciliation be used for tax reform?

Most of tax reform has a direct revenue impact and probably could be enacted through reconciliation, but it would either need to be revenue-positive over the long run or else rely on gimmicks, such as sun-setting rate reductions or other revenue-reducing provisions, to avoid increasing the long-term debt.

Compliance with reconciliation instructions and the revenue floor in the budget resolution is determined based on estimates supplied by the Chairman of the Budget Committee, which could potentially rely on dynamic scoring.

There will also be many special rules and other technical provisions to make tax reform work properly that may not survive Byrd rule scrutiny. If that is the case, then follow-up legislation to make tax reform stick may be required, and would be subject to traditional floor proceedings. Reforms of the Internal Revenue Service, which have often been included in tax reform legislation, would also violate the Byrd rule.

As a result, provisions adjusting or extending discretionary spending limits could not be considered because the actual increase or decrease in spending would not occur until subsequent action on appropriations bills subject to the limits. The Byrd rule also prohibits provisions that exempt the budgetary effects of reconciliation legislation from budget enforcement rules.

How may reconciliation be used in the new Congress?

Both tax reform and “repeal and replace” appear to be high priorities for the incoming White House and Congress, but because both have tax and spending components they could not be passed through reconciliation instructions from one budget resolution unless they were part of the same legislation.