Last week, Congress passed the Fiscal Year (FY) 2022 omnibus appropriations bill, which sets appropriations levels and allocations for the remainder of the 2022 fiscal year. The bill provides $1.512 trillion of budget authority for FY 2022, $88 billion (6 percent) higher than FY 2021 levels, $50 billion higher than in the Congressional Budget Office's (CBO) most recent baseline, and in line with FY 2021 levels when adjusted for higher inflation. In addition, the bill provides $13 billion in supplemental funding for Ukraine, and makes several small changes to mandatory spending and taxes that are roughly deficit neutral.

The omnibus's $1.512 trillion of budget authority includes $782 billion for defense and $730 billion for nondefense programs. This includes $1.471 trillion of base appropriations when changes in mandatory programs (CHIMPs) and special adjustments are subtracted; CHIMPs in the bill total roughly $15 billion, and the remaining $26 billion of adjustments include spending for disaster relief, wildfire relief, program integrity, the 21st Century Cures Act, and the Harbor Maintenance Trust Fund.

Compared to FY 2021 spending levels, the omnibus increases funding by more than 6 percent on average. Each of the 12 appropriations bills included within the omnibus increase spending by amounts ranging from 1.1 percent for the State Department-Foreign Operations bill to 13.2 percent for the Labor-HHS-Education bill. The Homeland Security, Legislative Branch, and Military Construction-VA bills also include double-digit percentage increases, while the other bills generally have increases in the range of 5 to 8 percent.

Total budget authority authorized under the bill is $50 billion higher than projected for FY 2022 in CBO's most recent current law baseline, with nearly 60 percent of that increase going to nondefense spending and over 40 percent going to defense spending. Extrapolating forward, this would represent a roughly $500 billion increase in discretionary outlays over a decade – enough to lift the debt-to-GDP ratio from a projected 107.5 percent in 2031 to about 109.0 percent. However, the increase is roughly in line with recently high levels of inflation. Relative to a baseline that incorporates that higher inflation last year and going forward, new appropriations would be roughly budget neutral. 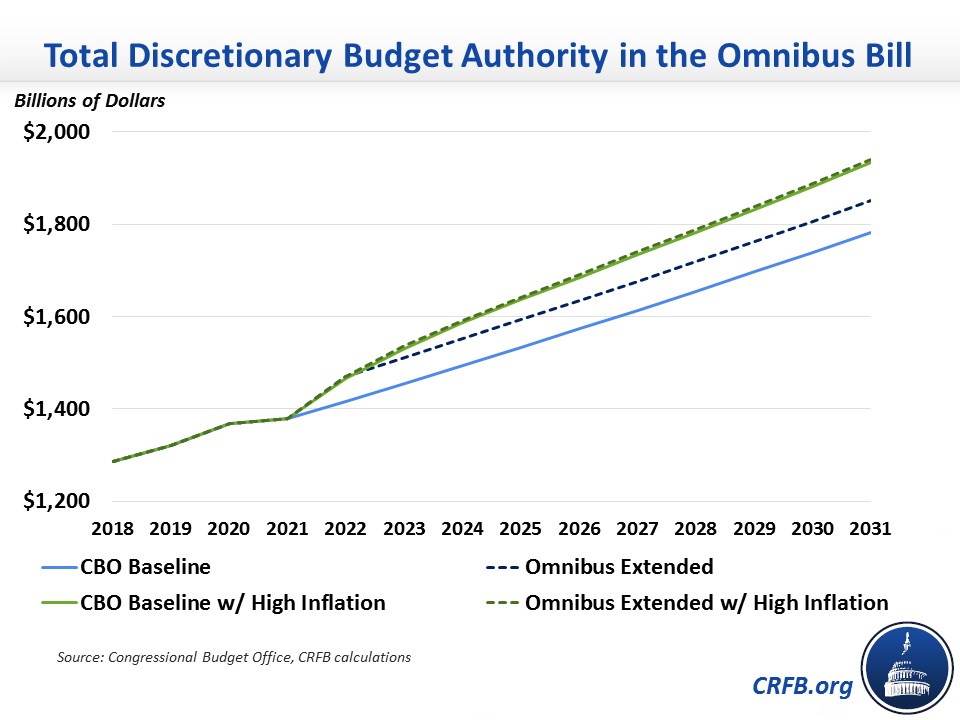 In addition to these appropriations, the bill provides $13 billion of supplemental funding for providing humanitarian, military, and economic assistance to Ukraine. It also makes several smaller changes to health care, immigration, and a few other areas, with a gross cost of $2 billion over ten years and similar offsets, leaving a net deficit increase of $148 million.