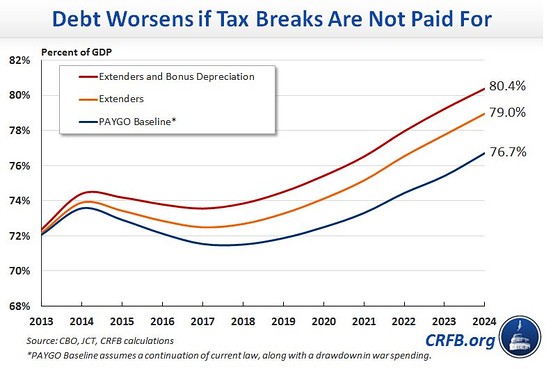 The tax-extenders deal got off on the wrong foot, and it just keeps getting worse.

At issue are 55 tax breaks that are part of the tax code on a temporary basis but are routinely extended. These breaks expired at the end of 2013, and Congress is scurrying to restore them. That we are only now discussing what do to about tax breaks that expired nearly a year ago underscores just how broken our government has become. It does not work to govern retroactively. Businesses cannot plan, invest, or compete when they don’t know the tax rules they must abide by each year.

What Congress should be doing is comprehensive tax reform. Many of these expired tax breaks, along with the $1.2 trillion worth of permanent deductions, credits, and exclusions that pepper the tax code, could be permanently eliminated or reformed, allowing rates to be lowered and providing the certainty needed to enhance economic competitiveness. In February, House Ways and Means Committee Chairman Dave Camp proposed an impressive array of tax-code fixes to do just that. But Congress ignored his plan and procrastinated, and now legislators complain that time is too short for real reforms.

Still, policymakers could go through all the expiring tax breaks and choose which ones to keep and which ones to get rid of. That’s what they did the last time they dealt with this issue. But, no, Congress is looking to extend the lot of them.

You might then think that lawmakers could at least find some offsets to pay for a temporary extension so the package doesn’t add to the country’s debt. (The Committee for a Responsible Federal Budget has posted some ideas to pay for an extension by increasing tax compliance.) But, nope, it seems that lawmakers don’t want to pay for any of it. They would rather add the cost, $40 billion to $85 billion, to the debt.

But even worse is that Congress is considering making a number of the tax breaks permanent–and wants to expand several of them in the process. The ramifications are staggering: The bill gaining momentum this week would add $500 billion to the national debt over 10 years. By comparison, the Ryan-Murray budget deal at the end of last year saved less than $25 billion over 10 years.

President Barack Obama has threatened to veto this package. What isn’t clear is whether he did so because the package would add hundreds of billions of dollars to the national debt or because it wouldn’t direct enough money toward the low-income and middle-class tax breaks he prefers. There is a significant risk that policymakers will seek to resolve this stalemate by making the package even bigger to appease the White House.

This is the worst kind of Washington horse trading: both parties piling on more and more deficit-financed tax cuts to get political support.