House Child Care Plan Cost Could Double If Made Permanent

As lawmakers discuss making numerous parts of the Build Back Better plan expire early, at least one part of the House bill — the expanded child care subsidies proposed by the Education & Labor Committee — is already written with an arbitrary sunset. The child care program would be partially in effect for three years, fully in effect for another three years, and then fully expire by the seventh year. As Committee president Maya MacGuineas recently explained, “these proposals don’t actually shrink the package; they just shorten it.”  We believe these subsidies could cost about $400 billion as written but $800 billion if made permanent. Assuming a lower initial cost of $250 billion, the permanent cost  would be closer to $475 billion.

Though the Congressional Budget Office (CBO) has not yet estimated this policy, a Moody's Analytics estimate of a similar proposal from Senator Elizabeth Warren (D-MA) found it would cost about $925 billion over a decade, excluding dynamic scoring effects.

On paper, the House bill would cost substantially less due to two timing strategies. First, it would offer only a partial program in the first three years, covering only families making up to 100, 115, and 130 percent of state median income in 2022, 2023, and 2024, respectively. It would also cap spending in those years at $90 billion total ($20 billion, $30 billion, and $40 billion) in those first three years, while allowing unlimited funding starting in 2025. Far more concerning, the legislation would let the policy completely expire after 2027. This puts the policy itself at risk but also creates immense pressure for a future extension that may not be fully offset.

Based on the Moody's figures and the caps in the legislation, the official cost of the program might total $400 billion. But making the program permanent would cost another $400 billion through 2031, bringing the total cost to roughly $800 billion. If explicit caps and phase-ins were removed, costs could rise even higher to about $925 billion. 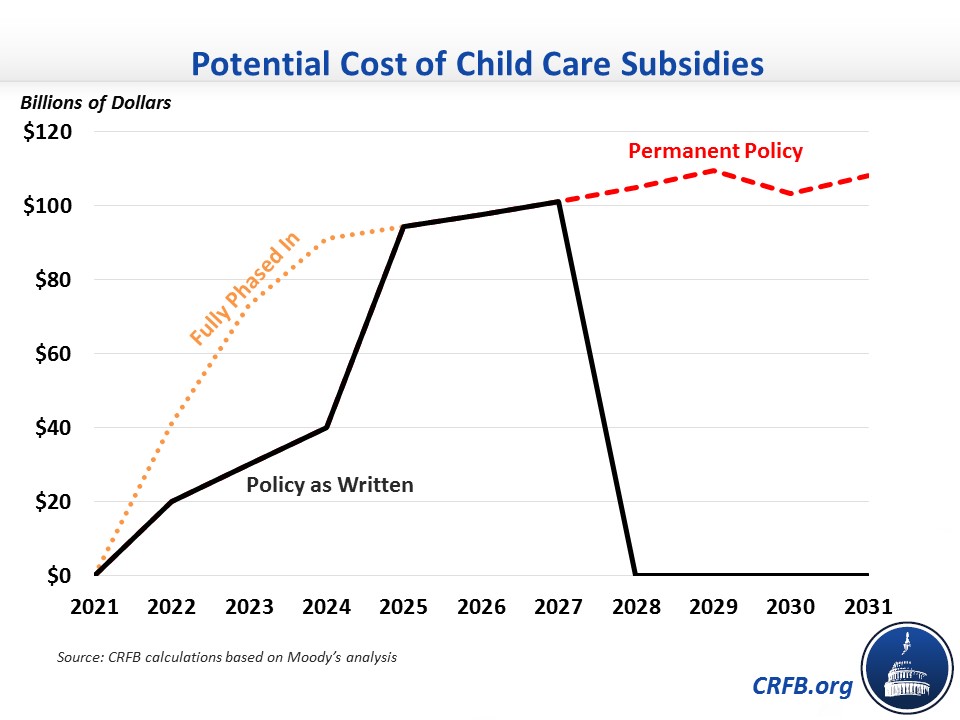 Importantly, we still have no CBO score of the child care legislation and it could cost less than the Moody's estimate of the Warren plan. If the official six-year cost of the plan was only $250 billion, we estimate the plan would cost roughly $475 billion with extensions.

In either case, the arbitrary expiration is hiding the true potential cost of the proposal and putting the program itself at risk. This is particularly problematic for a policy such as this child care plan where states will need to build new infrastructure to administer the program.

Rather than rely on arbitrary expirations, lawmakers should prioritize the policies that are most important to them, improve targeting, identify efficiencies to lower the cost of new spending or tax breaks, and fully pay for what they put forward. Our illustrative Build Back Better for Less packages show two possible ways to meet these goals.