A recent Wall Street Journal article highlighted the shortfalls facing the Pension Benefit Guaranty Corporation (PBGC), which guarantees defined-benefit pensions in the private sector. The financial condition of PBGC has improved due to a recovering economy and increased premiums brought about in the Murray-Ryan budget agreement. In 2013, before the agreement, the projected ten-year shortfall of the PBGC was $32 billion in 2013; it was $7.6 billion in 2014 after the agreement.

Nonetheless, the PBGC continues to face funding challenges. The improvement in PBGC finances has only delayed the date by three years at which the multiemployer fund is projected to be exhausted (with the expected date in 2025 instead of 2022), meaning that further action by policymakers will be necessary to ensure the PBGC can meet its commitments without relying on a general fund bailout.

The PBGC is tasked with stepping in when pensions fail to provide minimum pension benefits and is financed by premiums paid by employers. The PBGC offers two insurance programs with different premiums, rates, and payout rules: one for single employer plans, and another for multiemployer plans. Lawmakers have already raised PBGC premiums twice recently, first in 2012 in the highway bill and again in 2013 with the Murray-Ryan budget agreement. Last year's CROmnibus also gave pension plans the authority to reduce benefits to avoid needing a PBGC bailout. Still, the multiemployer fund has financial problems.

In February, the Government Accountability Office (GAO) put out a report, estimating the PBGC had a combined financial long-term deficit of $61.8 billion for 2014. GAO’s report estimates PBGC’s potential future losses at $184 billion, mostly stemming from the multiemployer fund. 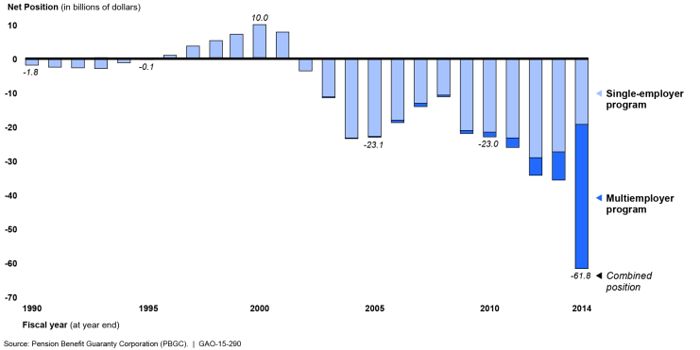 PBGC’s annual report further highlights the severe underfunding of multiemployer plans, mostly those involving unions with declining membership or driven by other factors such as lower-than-expected market returns and declining numbers of employees. These factors have been putting increasing stress on the PBGC, resulting in a greater need for pension guarantees while its funding source is being undercut.

Our Sequester Offset Solutions (SOS) plan recommends allowing the PBGC to increase premiums as necessary to maintain solvency, a provision also in the President's budget. This policy would raise $10 billion over ten years and ensure that PBGC can provide the promised backstop for workers and retirees without relying on a general fund bailout. By addressing a significant unfunded liability facing the government, this provision would improve our long-term fiscal outlook.

Similar to Social Security, lawmakers should address this funding problem as soon as possible to provide more certainty for pension plans and workers covered by those plans that depend on PBGC protection.