Did President Biden Reduce the Deficit by $1 Trillion?

In his first State of the Union address, President Joe Biden stated that he would be "the only president ever to cut the deficit by more than one trillion dollars in a single year" and that "by the end of this year, the deficit will be down to less than half what it was" before he took office. While the President's math is accurate, his claims of credit for reducing the deficit are misplaced and lack important context.

As we've noted before, the Fiscal Year 2022 deficit is slated to decline dramatically relative to 2021, and the debt-to-GDP ratio is likely to fall by the end of the fiscal year as well. But that is to be expected when most of the $5 trillion in COVID relief was disbursed in 2020 and 2021 while revenues sank due to the slowdown in economic activity. 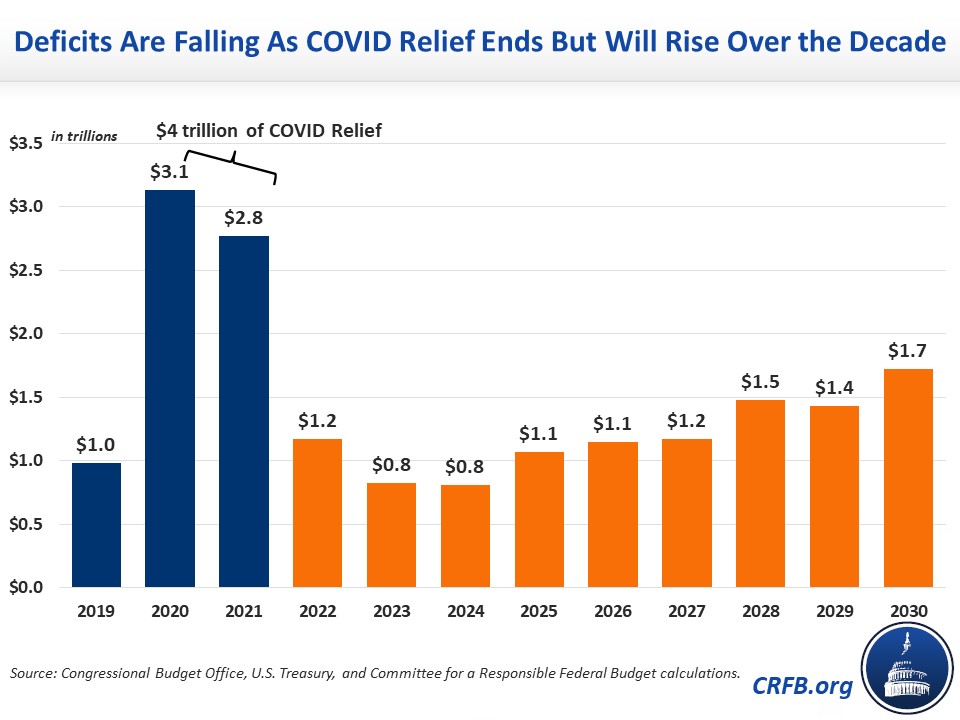 Importantly, the trend of declining deficits is only true for the next couple of years. With the structural imbalance between spending and revenue growing over the medium and long terms, deficits will grow for most of the next decade and worsen thereafter as our nation's trust funds deplete.

The deficit will fall by more than $1 trillion this year, but it is not because President Biden took efforts to cut it.

The national debt will still grow by more than $1 trillion this year and nearly $13 trillion over the next decade. Now is not the time to take credit for fiscal responsibility; instead, it would be better for policymakers to come up with a plan to reduce deficits and the debt over the coming years such that debt is on a sustainable downward path. That will take revenue increases, spending cuts, and tough choices on changes to entitlement programs. We owe it to our children and grandchildren not to lose sight of the progress that needs to be made.