The Congressional Budget Office (CBO) released a new set of long-term budget projections today, showing that the long-term fiscal outlook remains unsustainable even after the COVID-19 pandemic subsides. CBO's report partly extends their ten-year budget projections from last week through Fiscal Year (FY) 2051. Under current law, national debt is expected to grow to more-than-twice the size of the economy within 30 years, and interest is on track to become the largest single line-item in the federal budget. 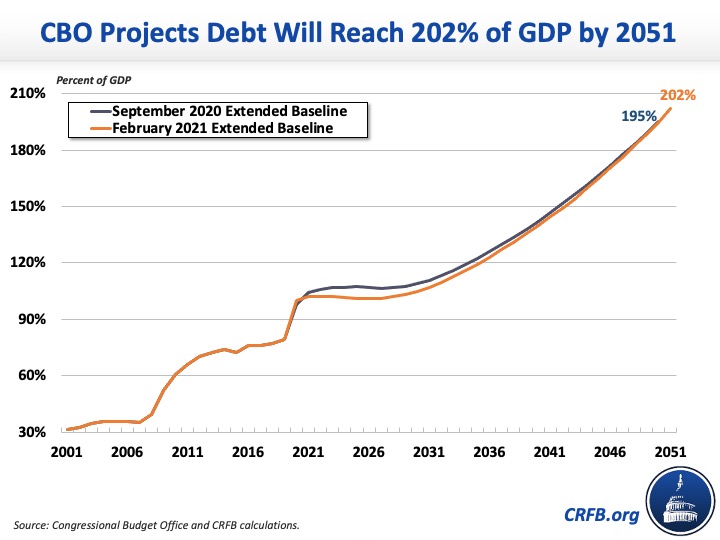 The debt situation could be much worse if lawmakers continue to act irresponsibly. We previously estimated that if lawmakers enact additional fiscal support to fight COVID-19, extend expiring tax cuts, and grow annual appropriations with the economy, without any offsetting savings, debt-to-GDP would be about 50 percentage points higher by 2050 than under current law. Applying that same rule-of-thumb to CBO's latest projections, we predict debt will grow to around 250 percent of GDP by 2051 under our alternative scenario.

Source: Congressional Budget Office and CRFB calculations. Debt figures represent debt held by the public at the end of the period.

Furthermore, these new long-term projections demonstrate that our debt trajectory is still unsustainable. High and rising debt will ultimately have serious, adverse consequences. As we've written before, rising debt slows income growth, increases interest payments, places upward pressure on interest rates, reduces the fiscal space available to respond to a recession or emergency, places an undue burden on future generations, and increases our risk of a fiscal crisis.