Introducing ‘Budgeting for the Future’

A majority of Americans are concerned about the national debt and want the federal budget to invest relatively more in children, according to a new Ipsos poll commissioned by the Committee for a Responsible Federal Budget.

The Committee has integrated the results of this survey into Budgeting for the Future, a new suite of interactive games and tools that allows users to test their budget knowledge, learn their budget personalities, and allocate the federal budget based on their own priorities. These games are available at https://www.futurebudget.org/.

“Over the next decade the federal budget will spend $60 trillion – that’s roughly $190,000 per person. This astounding number is why it is so imperative to engage the American public on how we should spend it, and how we should pay for it,” said Maya MacGuineas, president of the Committee for a Responsible Federal Budget. “Budgeting for the Future was created to do just that, while also allowing users to share their budget priorities with elected officials.”

Budgeting for the Future Tools 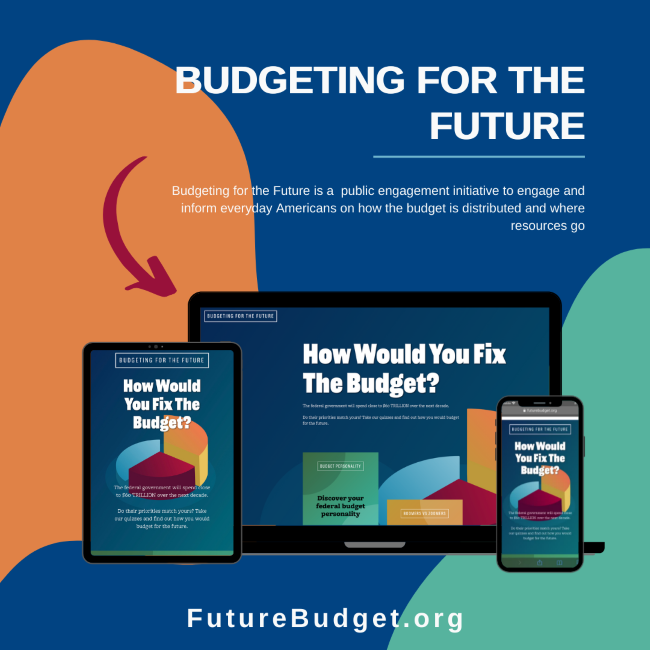 Budgeting for the Future encompasses five unique tools that test users’ knowledge and asks them to weigh-in on consequential fiscal decisions. They include a quiz assessing how much you know about the federal budget, a game that shows your budget personality type, a comparison of the breakdown in federal spending between generations, a tool where the user can show how the federal government should pay for its spending, and a series of questions about whether we should spend more or less on a given issue.

“We invite citizens to learn, discuss, and share their thoughts with lawmakers, and, we hope, have fun in the process,” said MacGuineas.

To try the tools yourself, visit https://www.futurebudget.org/

Three-quarters of those surveyed by Ipsos – including majorities of both Democrats and Republicans – agree that the national debt is a concern and could hurt the economy, with two-thirds viewing the debt as an unfair burden for future generations.

When asked to allocate federal spending between children, working-age adults, and seniors, respondents felt each age group should get similar shares of the budget. In reality, children only receive 15 percent of spending on people while seniors receive more than half.