The Ways & Means Subcommittee on Select Revenue Measures is holding two hearings today on limitations to the state and local tax (SALT) deduction, after several Members have called to lessen or remove the caps. However, lifting the limit on the state and local tax deduction (SALT) would cost roughly half a trillion over six years, and new estimates from the Joint Committee on Taxation (JCT) show the tax cuts would overwhelmingly accrue to the top of the income spectrum.

Currently, taxpayers are allowed to deduct the amount they pay in state and local income, sales, and property taxes. One of the large revenue-raisers in the 2017 tax bill was a $10,000 cap on the deduction. (though overall, the bill added almost $2 trillion to the debt.) Because the average household does not pay $10,000 in state and local taxes, the cap primarily limits the value of the deduction for high-income households.

The Tax Policy Center estimated that if the SALT cap had never been included in the 2017 tax bill, it would have added $620 billion to the bill's cost. Now that the tax cut has already taken effect, those estimates suggest repealing the SALT cap would cost roughly $500 billion through 2025 when the tax bill expires and another $100 billion per year beyond that if the bill was extended.

New estimates from the Joint Committee on Taxation confirm that repealing the cap would primarily benefit higher-income households. If the cap were removed, over half of the dollar value of the tax cuts would flow to households making over $1 million. Less than 6 percent of the benefit would go to taxpayers making under $200,000, and only 0.5 percent would go to those making under $100,000. 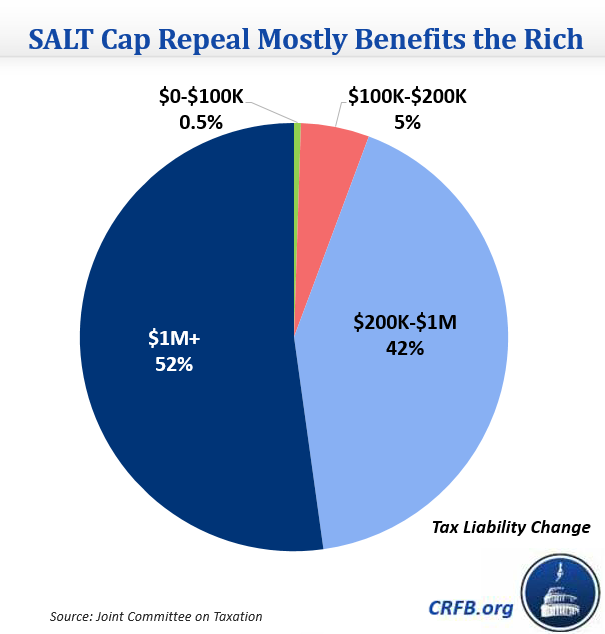 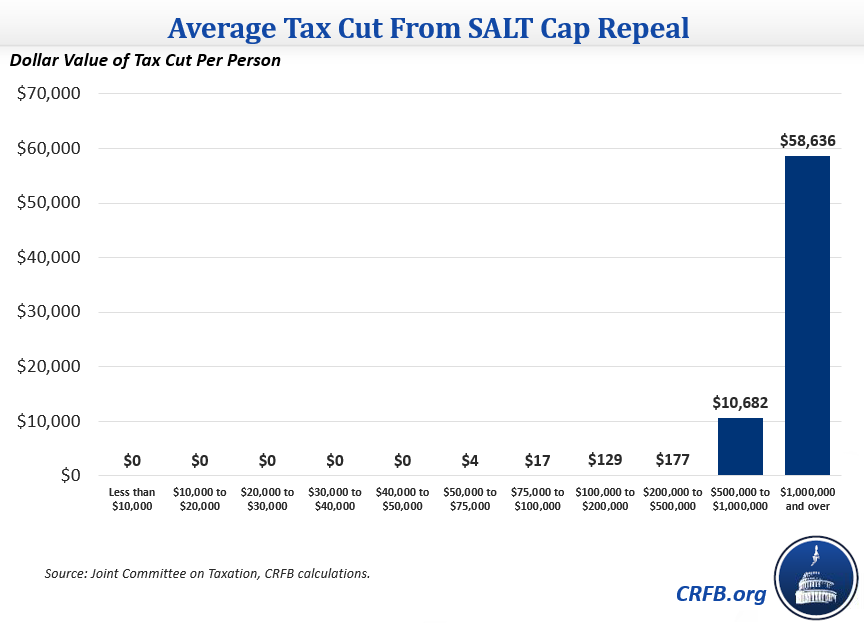 Repealing the SALT cap would worsen, not solve, two of the biggest criticisms of the TJCA – that it lost too much revenue and offered too much to high earners. It would also almost quintuple the size of the SALT tax break and add complexity by increasing the number of Americans who itemize their deductions. Instead of lifting the SALT cap, lawmakers should be strengthening it – for example by applying it to businesses. The goal should be fewer tax breaks and more revenue, not the reverse.