Different Approaches to ACA Repeal have Different Costs and/or Savings

Maya MacGuineas, president of the Committee for a Responsible Federal Budget, wrote an op-ed that appeared in the Wall Street Journal Washington Wire. It is reposted here.

Item number one on the Republican agenda is repealing Obamacare. Senate Budget Committee Chairman Michael Enzi has already introduced a budget resolution that includes reconciliation instructions to repeal President Barack Obama’s signature health law, the Affordable Care Act, and the House is planning to take it up next week. We still have no idea how much this will cost – or even if it will add to or subtract from the national debt.

There are a number of approaches to repealing the law – all with differing price tags.

At the Committee for a Responsible Federal Budget, we just completed a study analyzing the costs or savings associated with different approaches. (Though it still remains unclear what form any replacement will take so the bottom line is impossible to assess.)

Full repeal – including getting rid of coverage provisions as well as the tax increases and Medicare savings that paid for the reforms – would actually cost $350 billion over a decade under conventional scoring and $150 billion under dynamic scoring. (The dynamic score, which incorporates changes to the economy, is less because work incentives are better without the ACA). Repealing only the ACA’s coverage provisions while leaving in place the cost-saving measures would save $1.55 trillion, or $1.75 trillion on a dynamic basis. Or, there is the hybrid approach of repealing the coverage and tax provisions but keeping the Medicare changes in place, which would save roughly $750 billion, or $950 billion on a dynamic basis. 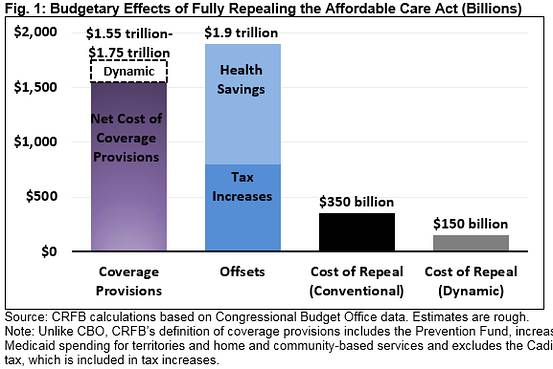 A more likely approach is some kind of staggered approach involving immediately repealing the ACA mandates and taxes while delaying the repeal of the other coverage provisions as a replacement package is crafted. That approach would potentially save from $550 billion (for two years) to $300 billion (for four years.)

But policy makers will have to determine how to replace the coverage provisions. Doing nothing will lead to a loss of health insurance for 23 million people by our estimates, and the true costs of health-care reform will only be known when both the details of repealing and replacing have been determined.

Health-care reform should be about improving health care, providing coverage, controlling costs, and improving the solvency of our existing health-care programs. It is becoming increasingly clear this will be no easy task.