The third COVID-19 relief bill was signed on Friday, and lawmakers are now starting to propose ideas for the next round of stimulus. House Speaker Nancy Pelosi (D-CA) floated an idea in a New York Times interview to "retroactively undo [the] SALT" deduction cap. Repealing or increasing that cap would be costly and poorly targeted as pandemic relief as benefits would flow almost entirely to high-income households, and retroactively doing so would be an even larger windfall to high-income households.

The SALT cap limits the deduction for state and local sales taxes to $10,000, enacted by the 2017 Tax Cuts and Jobs Act (TCJA) to broaden the tax base. Completely repealing the cap retroactively for the last two years would cost over $130 billion, with about half the benefit going to households making over $1 million a year.

Speaker Pelosi, through a spokesperson, made clear that her proposal would raise the SALT cap rather than eliminate it, to keep the benefits "tailored to focus on middle-class earners and include limitations on the higher end." But because middle-income households take a standard deduction of almost $25,000 per couple instead, the cap primarily limits the value of the deduction for high-income households, and very few middle-income families would benefit. According to estimates from the Tax Policy Center (TPC) and the Joint Committee on Taxation, repealing the cap would only provide an average tax cut of less than $15 to families making less than $75,000.

This form of pandemic relief would be much more poorly targeted than other forms of relief. The recently enacted CARES Act includes sending checks of up to $1,200 to most adults and $500 per child at a cost of $290 billion. Again relying on TPC data, a household making between $40,000 and $50,000 will get an average benefit of $1,660. Repealing the SALT cap retroactively for two years will also send out checks as people amend their 2018 and 2019 taxes, but those checks would be almost exclusively sent to high-income households. The average household making over $1 million would receive over $100,000. Households making less than $50,000 would receive almost no benefit from repealing or raising the SALT cap. 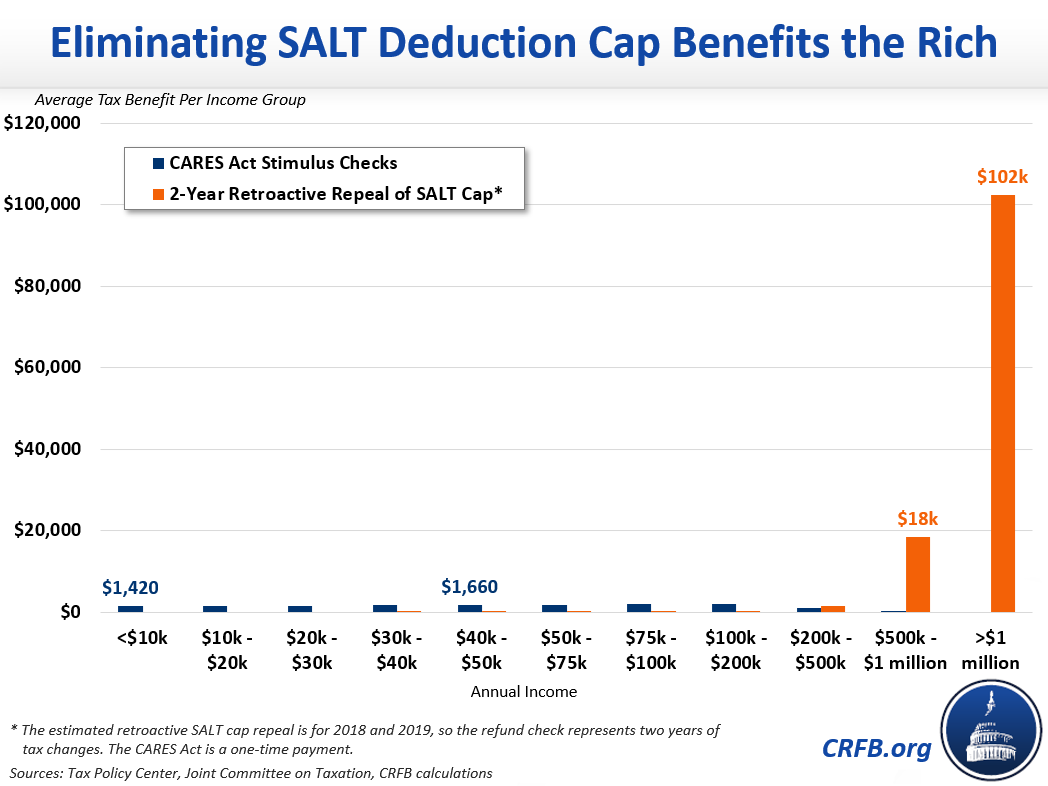 Other Members of Congress have already proposed completely repealing the cap on SALT deductions, which would be both costly and regressive. Based on TPC's analysis, we estimate that the retroactive change would cost over $130 billion, and repealing or loosening it for this and/or future years would cost substantially more. About half of the dollar value of the tax cuts would flow to households making over $1 million. Less than 6 percent of the benefit would go to taxpayers making under $200,000, and only 0.5 percent would go to those making under $100,000.

Making the change retroactive means that even the usual stated reason for the change – improving state budgets – cannot occur as states would not be able to retroactively raise more revenue.

Repealing the SALT cap would worsen, not solve, two of the biggest criticisms of the TCJA – that it lost too much revenue and offered too much to high earners. It's essentially the same as sending people checks, except low- and middle-income households would get little or nothing.

Lawmakers should not pursue an unpaid-for repeal or increase in the SALT limit, let alone as a part of a stimulus bill intended to provide pandemic relief.